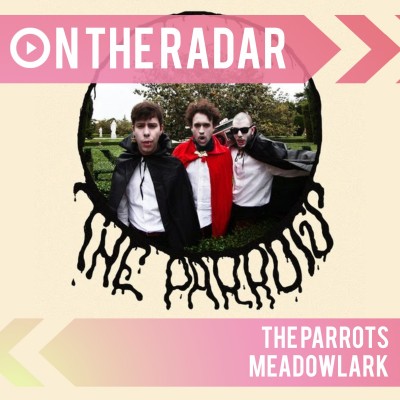 Tapping into the traditions of college radio and the raw 60’s garage which was the formative sound for punk, The Parrots display a ‘Don’t Care’ flamboyance through their raw riffs and powerful pounding party tracks.

The trio met as students whilst attending university in Madrid and immediately were drawn to work with each other, finding a common bond in wanting to create off kilter rock and roll as opposed to the all-pervasive indie bands which held the city like a vice. The Parrots wasted no time and threw themselves into gigging relentlessly.

Each performance was like a small act of defiance, chipping away at the stale scene and eventually creating their very own space in the musical territory of Madrid as they became tighter and wilder as a band. Gigs expanded into tours and The Parrots took flight and began to play further afield.

It was while they were playing at SXSW in Austin just last year they caught the attention of cult label Heavenly Recordings who paired them up with Hooton Tennis Club upon signing to head out on the road together.

So, check them out when they play at Tank Underground in Newcastle on Tuesday 2nd of May, 2017. We have yet to hear of any UK festival appearances so this might be one of your few chances to catch them this year.

You may well have heard of McGill before. She first started out by posting her innovative cover versions on YouTube. She quickly became renown for her reworking of Adele’s song Someone Like You which was the prime feature on her channel which has subsequently amassed over 30 million views. Despite her obvious success, she made the bold creative decision to move past playing covers and looked to work on her own original material. At the end of 2012 she played a sold-out gig at Surya in London to mark the end of this era of her musical career.

Meadowlark was formed with Broadley in the spring of 2013 and their arrival was announced with the release of the live track Family Tree. They have subsequently also brought out the debut EP Three Six Five, follow up EP Paraffin and the two singles Quicksand and Headlights with their first album outing expected later in the year.

By sparsely implanting the instrumentation they allow the silence to capture an emotive weight which adds to the confident vocal delivery. By allowing the piano, synth guitar and drums time to echo and fade, the emphasise placed on McGill’s vocals becomes that much greater culminating in songs which are loaded with pathos whilst also sounding ultra cool.