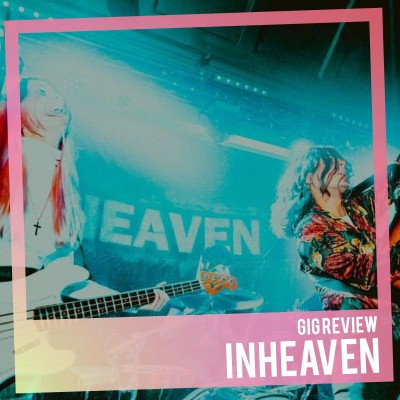 INHEAVEN were one of the brightest new bands to emerge in 2016. Drawing on the heavy side of indie rock whilst clearing being informed by shoegaze, their songs typically draw the listener in with intricate verses and roar magnificently at the chorus.

The New Cross based band is led by guitarist James Taylor and bassist Chloe Little who share vocal duties, with Jake Lucas also on guitar and Joe Lazarus playing drums.

The last time we caught up with them, they were blowing the roof of The Bodega with a string of awesome singles following a summer of prominent festival appearances. Today we catch them at The Venue in Derby towards the end of the end of the tour to promote the upcoming release of their as yet untitled debut album.

The new material is being recorded at Rockfield Studios in Monmouthshire. Anyone with a casual knowledge of rock history will tell you the studio is hallowed grounds. First opened in the 60’s, Rockfield is known to be a hitmaker with Adam And The Ant’s Kings Of The Wild Frontier, (What’s The Story) Morning Glory by Oasis and Bohemian Rhapsody all recorded there.

But before the album comes out INHEAVEN treat us to live performances of the new material in addition to their more familiar songs.

The audience is a distinctly young crowd. So much so that I pity the venue owners because they’re not going to be able to sell much booze tonight. But an adolescent audience makes for a pretty wild ride and tonight the band prove they know exactly how to work a room. Kids are abandon their jackets as the stage fills with dry ice heralding the oncoming headliner and when the first chord is struck the place explodes.

INHEAVEN have the rare ability to write songs of such high calibre each one feels like a potential single. Their clear dedication to their craft means the pop hooks, catchy chorus and huge sound translate into flawless live performances. Baby’s Alright is wonderfully infectious and has everyone pogoing while Treats is the post-grunge song that drives the mob out of their minds.

New song World On Fire is announced by an over enthusiastic teen fan who has already stolen the set list mid gig and turns out to be an over driven gem perfect for those hot summer car drives with the windows down and the wind in you face.

The set finishes with their huge number Regeneration. A stage invasion starts with a single overexcited fan’s infiltration just before the first chorus. By the songs end the amount of people onstage vastly outnumbers the remaining spectators and James drops the guitar to thrust the mic into his gleeful new choir to sing the remainder of the song.

My one complaint was that the set was frustratingly short, ending after only thirty minutes. But then, I’d rather have a furious burst of relentless energy than a half-arsed effort from a band just going through the numbers and a boorish pre-scripted encore.

Speaking to the band after they finish I ask them how the recording has been going. They tell me that they recently went back to Rockfield for a second session to record World On Fire and further new number Vultures which also went down a storm. Relieved they are returning to the same studio, thus hopefully maintaining the continuity of the sound and feel, I enquire if the upcoming record has a name. James tells me they’re toying with the idea of numbering each album in a manner akin to Led Zepplin. “We’re not just thinking about the second album but also the third. We like the idea of working in threes and doing a trilogy of albums… maybe with variations of the same image on the cover.”

When asked if the upcoming record has a specific direction James states that hasn’t been a prime concern; “We’ve literally got hundreds of songs written. It has just been a case of picking out the best!” Which, for a band that does have a knack for writing excellent self-contained songs, is probably the best method. Hopefully this will produce that sort of debut album which is pure perfection with each track a classic in its own right. And although I do wonder if the idea of a trilogy of albums conflicts with a Darwinian approach of writing a multitude of songs and awarding the strongest to be recorded rather than having a distinct concept in mind, I think we can trust a band that thrills with every performance.