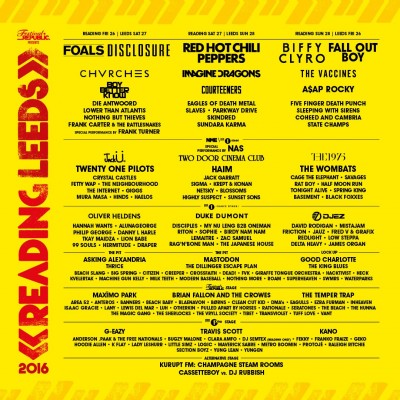 The two festivals have always been a great barometer of who is hot. The festivals have forged their reputation for unforgettable performances by skilfully picking the very best bands, DJ’s and solo artists around.

Classic past performances have included the return of Rage Against The Machine at Leeds in 2008 and the now legendary Nirvana performance at Reading in 1992. Special mention has to be made for the line-up of 1999. This being the first year that Leeds joined the already infamous Reading, the organisers sent everyone crazy when they booked massive headliners Red Hot Chili Peppers, Blur and The Charlatans.

Today, the organisers have announced over 70 massive names newly added to both Leeds and Reading Festivals. Let’s take a look at the best and the rest.

New York Hip Hop will Nas be playing his only UK Festival appearance at Leeds and Reading this year. The pioneering MC has been spitting rhymes for over 25 years and this summer sees him set fire to the BBC Radio1/NME Stage.

Folk hero Frank Turner makes a welcome return. With huge singalong anthems, Frank is a firm festival favourite and sure to delight at both sites.

“I'm very happy to be making my tenth annual return to Reading and Leeds Festival this summer. That's the record, by miles, and I'm proud of it. They've always been supportive of my career, loyal to me, and I'm more than happy to repay that in kind. It's the best festival in the UK.”

If you want to see Good Charlotte then make sure you head down to Leeds or Reading because they won’t be playing at any other festival in the UK this summer.

"For us there's no better way to celebrate the GC comeback than to come do it at Reading and Leeds. Everyone's favourite festival. It will be a highlight for sure.”

Grime MC Kano makes his highly anticipated comeback with new album Made In The Manor. Bringing the best of British beats Kano is surefire hit at the top calibre festivals.

Special mention needs to be made for the Mastodon. The heavyweight metallers will be shaking tectonic plates when they headline The Pit. Tonight Alive will be their only UK festival appearance this year on The BBC Radio1/NME Stage. Ever popular rockers Coheed and Cambria make a return appearance on the Main Stage. After last year’s death defying set, new band HECK have been invited to appear again.