Everything Must Go 20th Anniversary 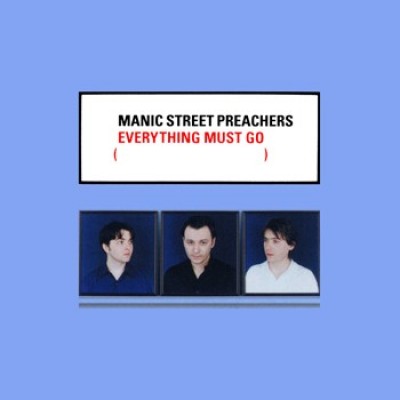 The 20th of May marks 20 years since the release of the seminal record Everything Must Go by Manic Street Preachers.

The album was unexpected coming so soon after the disappearance of lyricist and rhythm guitarist Richey James Edwards and the recent death of their manager and mentor Philip Hall. The album marked a stylistic change for the band with its anthemic string laden songs with lyrics that focused on the personal rather than the political.

The change in style saw a change in success for a band that had previously been subjected to scathing press reviews. The outsiders that had once been at odds with the world now began to fill arenas.

However, it would be a mistake to write off Everything Must Go as just another nineties guitar album. Pending the anniversary of the album, we look at some of what made the band great over the years of ’96 to ’97.

With the possible exception of Motorcycle Emptiness, the band were yet to release a hit single that the wider audience outside of their fans could immediately recognise and identify with.

Design For Life spoke of the politics of class identity at a time people were being told class had been resigned to history. Whereas previously the band had a reputation for writing dirges this first single off the album, with its brooding bass line, sweeping violin strings and crashing chorus, was a triumphant rallying cry for the disaffected.

Still unsure of their future, the band’s performances were tinged with an anxiety, compensated with sheer ferocity. They hadn’t won over the public yet and were still more of an indie band with something to prove. This made for powerfully angry and passionately electrifying gigs.

But prove themselves they did. Everything Must Go saw the Manics become household names. This performance of Wham’s Last Christmas on cult TV programme TFI Friday by James Dean Bradfield was reportedly a spontaneous decision with by the band’s singer.

However, despite now appearing in the most unexpected of places, they refused to play the game and become part of the easy going Britpop culture that pervaded everywhere in the mid-nineties. Where other bands would gleefully declare that they hadn’t read a book since school the Manics would fiercely declare their intelligence making for compulsive viewing as exhibited in this spikey interview of Bradfield by Davina McCall and questions from the audience.

The album proved to be a massive success which commanded the respect of critics and the listening audience. Their success was solidified at the 1997 Brit Awards where the band took home the most awards all evening including Best British Single and Best British Video for Design For Life, Best British Album for Everything Must Go and Best British Group.

In typical fashion for a man who had written about the power of public libraries, Nicky Wire dedicated their success to comprehensive schools as they produce “The best bands, the best art… and the best boxers too.”

To celebrate #EMG20 Manic Street Preachers will be performing the all-important album, additional hits plus rumours of new songs at Swansea Liberty Stadium on Saturday 28th of May.