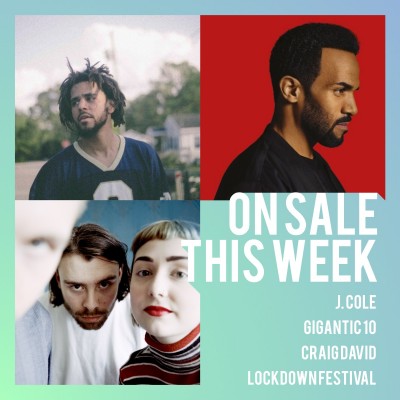 Multi-platinum selling rap artist J. Cole is one of the world’s leaders in hip hop. He became the first act to be signed to Jay-Z’s Roc Nation Label after waiting determinedly outside the office for hours to hand him a demo tape, J. Cole has since seen each album release top the US charts.

With the release of his stunning fourth studio album entitled 4 Your Eyez Only, J. Cole embarks on a massive arena tour in October which takes him to some of the biggest stages the UK has. Tickets go on sale at 10:00 and are expected to sell fast so set a personal reminder right now!

Having sold over 5 million albums worldwide, released 16 top ten hits and achieved multi-platinum status in over 20 countries, Craig David has already more than proved himself. New album Following My Intuition hit #1 and is a well return for the R&B superstar.

Craig David has already announced that he will be playing at the idyllic locations of Westonbirt Arboretum in Gloucestershire and Dalby Forest. He has also recently announced further headline performances at a string of big venues, each promising to be an unmissable evening.

Gigantic are very proud to announce that 2017 marks a decade since we first began trading. Led by founder Mark Gasson, Gigantic has grown from a three-person team to now inhabit a two-story bespoke office enjoying the support of more than 500,000 subscribers.

So, come celebrate our first ten years with a big party at The Angel Microbrewery featuring a selection of our favourite artists including awesome alt rock band Kagoule plus more yet to be announced!

Community Festival is a one day celebration of the very best new music. Held at Finsbury Park in North London, the new exciting event looks set to totally rock a vibrant capital city known for its rich and varied live music scenes.

Born from a multi-venue event held across the fashionable district of Shoreditch, Community Festival consolidates all that energy into a huge event which boasts the likes of Catfish And The Bottlemen, The Wombats, Slaves, Nothing But Thieves and more!

Sex icon Tom Jones burst onto the scene in the sixties and has enjoyed a career which has seen him sell 100 million records worldwide, receive a Grammy Award and a knighthood. The Welsh wonder is also a star judge on hit musical talent show The Voice. This year sees Jones perform huge open air concerts which are expected to sell out quickly. Tickets will become available at 09:00 on Friday (24th of February).

Close friends Michael Ball and Alfie Boe are considered two of the greatest singers in the world. The pair combined their immense talents to record the shared album Together. They have already announced a tour to promote the new material but have just added an extra special date at Old Royal Naval College in London. Tickets go on sale at 09:00 on Friday (24th of February).

We have a huge amount of amazing events coming on sale each and every week. Further events about to become available are;

Lockdown Festival is your massive dance weekender in the South West. Look forward to three days of big beats brought to you by such huge names as Wiley, Sigma and Dizzee Rascal at Powderham Castle in Exeter.

Leicester festival Handmade often reveals the musical character of the year to come. With Twin Atlantic, British Sea Power, Cabbage, Kagoule plus more all added to the bill, you can bet it will be an unmissable weekend.

If you are into metal you need to UK Tech Fest. The 2017 line up announced so far includes The Black Dahlia Murder and Obscura who are both making their only UK appearance at the festival, plus Aborted, The Arusha Accord, Hacktivist plus many more.

There are few people more influential to modern music than Brian Wilson. The living legend was the driving creative force behind The Beach Boys who did much to define the sound of the sixties and shape the way for pop and rock in the future. Catch his summer dates where he will be performing seminal album Pet Sounds in full.

Magic Of Motown celebrates the style and sophistication of the soul sound which continues to be so prevalent. The touring show offers a huge array of music by such solid gold artists as Supremes, Temptations, Jackson 5, Isley Brothers, Stevie Wonder, Marvin Gaye, Diana Ross and Lionel Richie.

And finally, other great events we know you will love are;