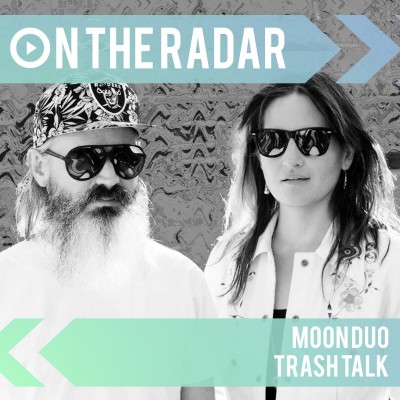 Portland progressive psyche pairing Sanae Yamada and Ripley Johnson are Moon Duo. They make bold leaps into the unknown uniting their passion for the esoteric with their unrivalled talent for musical exploration making a perfect unison of the synth heavy prog rock with wonderfully bizarre lyrics.

Keeping in theme, the new video for single Cold Fear sticks with supernatural imagery but merges it with pastiche cyberpunk anime to create visuals akin to an Adventure Time take on Akira. The video taps into body horror and transgressive alarm as the music pulses and explores uncharted sonic territory. The bizarre visuals are perfectly apt for a band unafraid of challenging their audience and they proudly display this towards the end of the songs video as a representation of the pair have their essence distilled into an embryonic cell only to be sucked dry and digested by a viewing audience of monsters. The single is taken from their fourth album entitled Occult Architecture Vol. 1 which has also produced the awesome single Creepin’.

Johnson and Yamada hit the UK for a spring tour so dare to join them for exciting nights descending into the unknown.

Anyone into thrash needs to know Trash Talk. The Californian hardcore punks uncompromising approach to music generates a barely harnessed rampant energy which translate into tracks that slam into the ears like a car crash.

The wild band is known for taking their shows to the extreme, having played chaotic house parties shut down by the police. Merging destructive distortion with hard hitting drums and taking on influences from hip hop, the West Coast band prove to be as inventive as they are crazed.

After the release of their recent EP Tangle, Trash Talk make their return to the UK playing a handful of essential dates in March. Get down for a massive unmissable night where they will create their huge wall of sounds live, throwing their fans into a frenzy.