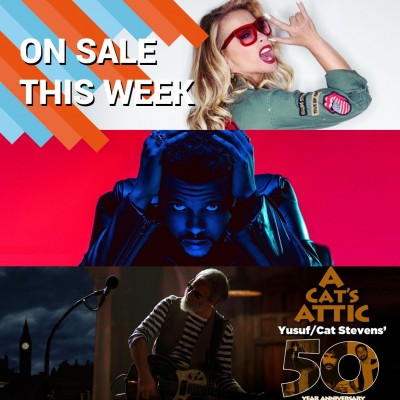 Multiplatinum selling experimental R&B superstar The Weeknd has taken the world by storm with albums Kiss Land and Beauty Behind The Madness.

He continues his meteoric rise with the impending release of third studio album Starboy, The Weeknd has announced his massive Starboy: Legend Of The Fall 2017 World Tour which takes him to some of the biggest stages the UK has to offer during March of 2017.

Get excited, because huge international pop phenomenon Anastacia returns to our shores for a tremendously exhilarating tour that must not be missed.

The fabulous singer’s hits include Paid My Dues, Sick And Tired, Left Outside Alone and I’m Outta Love. With news of an upcoming new album you can expect to hear her classic songs plus exciting new material when she hits the UK in May and June of 2017.

Iconic singer-songwriter and 2014 Rock and Roll Hall of Fame inductee Yusuf / Cat Stevens has announced a UK tour which takes him to O2 Apollo Manchester, Clyde Auditorium and Newcastle City Hall. The tour will give fans the chance to hear his remarkable catalogue - including tracks such as Moonshadow, Father and Son, and The First Cut Is The Deepest.

Catch him this November when he plays at Manchester, Glasgow and Newcastle.

Canadian lo-fi heroes Grandaddy have made their surprise and very welcome return with brand new single Way We Won’t with a brand new album on its way. The sardonic indie rockers will be doing the rounds in March of 2017 and tickets become available on Friday.

Get ready for the release of tickets super jazz fusion ensemble Snarky Puppy who will take over O2 Academy Brixton. The huge troupe have taken home a couple of Grammys and set the jazz world aflame with their scorching performances.

The Pretty Reckless have fans frothing at the mouth with the news of their gig at iconic Nottingham venue Rock City to promote their new record Who You Selling For. It is the latest release for the blues rock band that stars Taylor Momsen and tickets are expected to sell fast. Other mind blowing heavy guitar bands about to come on sale include metallers Underoath, Cambridge five-piece Mallory Knox and supergroup Hellyeah.

Those in the know are all talking about post punk agitators Cabbage. Hailed as Manchester’s most exciting new band, they take their fierce confrontational tracks to the road next year. Alternative audiences will also be preparing for the release of Swans tickets for their Roundhouse show in May when they are supported by Thurston Moore. Plus, Cherry Glazerr and Tycho tickets will soon be on sale.

Join James Arthur for two fantastic dates where he will be performing tracks from his latest album Back From the Edge and his early mega hits.

If you want your guitars loud, harsh and heavy then Download Festival is the place for you. The world famous festival attracts the very best metal, punk, alternative, ska and rock bands marking it as THE heaviest event ever.

Keep your eyes peeled, because the organisers announce their first batch of bands later today. With each year being better than the last, they are sure to surprise you with something special. Presale tickets on right now.

Presale tickets are available now so book your today.

Standon Calling 2017 have just released their great value Earlybird tickets. We only have limited amounts so book early to take advantage of the great offer.

Taking place at an idyllic site just 20 minutes from Stanstead, their previous extraordinary acts include the likes of Kelis, Jess Glynne, Suede and Goldie. Expect great things from their festival next summer.

Firmly established as an essential date on the cities musical calendar, the festival takes places across the many vibrant venues in the buzzing hub of the Hockley region and showcases the incredible talent produced by Nottingham’s bourgeoning music scene.

Julian Cope first found fame as the front for perfect post punk band The Teardrop Explodes before becoming a huge star in his own right. See his wild anarchic live performance when he tours in February of 2017.

Club De Fromage is the cheesy night out that always gets London dancing. Offering a great night out of proper tunes and fancy dress, each of their events attracts a loyal following. Get your tickets for their New Year’s Eve party which just so happens to also be their 10th Birthday for an extra special celebration.

We have a great selection of guitar heroes on sale, such as the up and coming scuzz rock band Get Inuit, intense noise metal from Black Peaks, remarkable indie rockers The Boxer Rebellion and cool Canadian emo band Seaway. Plus, Norwegian black metal band Mayhem will play their seminal album De Mysteriis Dom Sathanas in full.

BE Live has certainly impressed the critics. Described by Mary Anne Hobbes as “Absolutely wonderful”, the event merges art with musical performance streaming the sound of a working beehive to create a truly unique experience.