Get Ready To Rock! 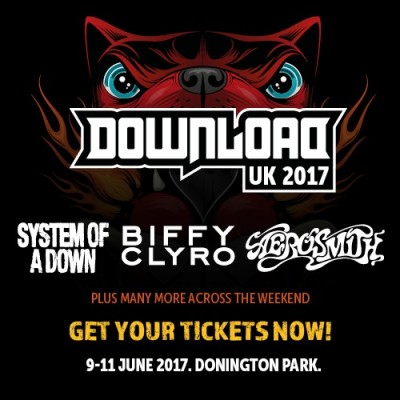 Download is widely regarded as the world’s greatest rock festival and attracts heavy guitar fans from across the entire globe who are drawn to the pedigree line up of rising stars, blistering hot bands and rock icons. The festival returns to the immense Donnington Park in Leicestershire and runs from 9 – 11 June, 2017.

Regular festival goers and eager newbies were glued to screens last night awaiting the first bands to be confirmed including the all essential headliners. We can now reveal System Of A Down, Biffy Clyro and Aerosmith will headline Download 2017.

System Of A Down

The first headliners of the festival will be System Of A Down, making this the third time they have been the final act on the main stage. A firm fan favourite, their furious flurry of disjointed hardcore metal hits include Toxicity, Chop Suey, B.Y.O.B. and Aerials.

"It’ll have been a couple of years since our memorable Wake Up The Souls show at Wembley, so returning to the UK to headline Download, a festival we always love to play, is really exciting for us.  The energy and atmosphere there is always electric.”

Topping the mainstage on the Saturday night will be Biffy Clyro. Riding high from the release of new record Ellipses, their second #1 album, the irrepressible alt rock band are poised ready to bring their incredible stadium show to the festival’s main stage.

They have amassed legions of fans with such massive anthems as Wolves Of Winter, Bubbles and Mountains.

Rounding up Download 2017 will be the true rock legends Aerosmith. They have consistently proved that they are amongst the best bands in the world and state that this will be their ONLY UK performance for the year.

No-one tears up the stage quite like Steven Tyler and co. so look forward to hearing Dude (Looks Like a Lady), Walk This Way, Don’t Want to Miss a Thing and more. What a way to bring such an epic weekend to a close!

"Every time we go on tour I look at the schedule for cities, towns or events that I look forward to playing. Download Festival is always one of the ones I circle. Donnington is like home to us. I have some great memories playing there and I can't wait to make some more." – Joe Perry

Other incredible acts that have been listed are;

With such an amazing line up tickets will sell incredibly fast so book yours before they are gone. And remember, this is just the first wave of bands to be confirmed. Expect even more exciting announcements to come!