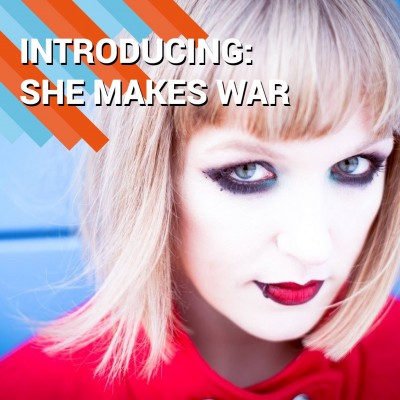 Leading gloom pop act She Makes War is the work of polymath Laura Kidd. The pensive music veers wonderfully from bright brash indie rock to intricate bedside confessional songs that invite the audience into a private world where intimate secrets are revealed.

So far, She Makes War has released three amazing albums; Disarm, Little Battles and Direction Of Travel which was released during Spring of this year and features a guest appearance from alternative icon Tanya Donelly - plus a number of essential EPs and live albums.

The talented multi-instrumentalist also gives spoken work performances and enjoys exploring other outlets for her creative energy through various other projects and even hosts her very own events.

With She Makes War about to release new single Stargazing and about to embark on tour, we spoke to Laura about the music, her various other projects and what we can expect in the future.

How did you first become involved in music?

I’ve loved singing since I was a little girl, decided I was going to be a build my life around being a musician aged 13 and got around to writing my own songs seriously after playing bass and singing backing vocals for artists including Tricky, Lil’ Chris and Alex Parks.

Can you tell us about your projects Breakfast With Apollo and Stand Up?

I started promoting my own shows in 2012 while I was still living in London, I wanted to build my own audience and curate the line-up rather than getting shoved onto bills that made no sense, never being offered a chance to headline just because I usually play on my own. They’ve been a great success and a lovely way of bringing audiences together between playing support slots with bigger bands - it’s a totally different feeling when people have come specifically to see you play. Last year I took a one-woman music and comedy show to Edinburgh Fringe - in “Shit Girlfriend” I played six of my saddest songs and shared humorous anecdotes about them and me as part of a list of reasons why musicians are terrible romantic choices. Watch out for “Shit Girlfriend #2” next year...

Your sound ranges from the energetic frenzy of riot grrl to something more akin to the quiet story telling tradition of folk whilst also including smatterings of electronic instrumentation. Where do you draw influence from when writing and has this changed as you continue to work?

I draw influence from books I read more than music I listen to - I’m not interested in sounding like anyone else, I just want to share thoughts and experiences honestly. Before a chunk of songwriting I always make sure to listen deeply to excellent lyricists though in the hope they’ll rub off on me - The Shins, The Smiths and St Vincent are always on the list - and I keep poetry books handy to help spark thoughts. Ted Hughes and Siegfried Sassoon are my latest favourites.

There appears to be two very distinct sounds for She Makes War which veer either towards the watery ethereal confessional songs like In This Boat, Please Don’t and Stargazing which appear alongside the more brash songs such as Exit Strategy, Minefields and Cold Shoulder on the same albums.

Despite the huge differences the albums always feel like a complete piece of work rather than a list of songs. How do you go about keeping the feel of a record with such differing sounds and does it feel jarring to go from recording mainly by yourself to then change to a full rock band accompaniment?

It’s easy because I always record mainly by myself, with very occasional guests (live drums, piano, strings) - I play all the other instruments and “Direction Of Travel” was recorded partly at a small Bristol studio and partly in my studio at home (I did all the vocals, ukulele, keyboard, omnichord and extra percussion there). My tastes are very eclectic so it doesn’t seem strange to me to go from a dreamy ukulele song to playing riffs - I think of my music as my personality in sound form, so as long as the album has a heart and a coherent story I’m confident it will hold together as a piece of work.

Do you often feel vulnerable when performing alone on stage and in the studio or does playing independently give you a sense of freedom that playing with others can curtail?

I don’t feel vulnerable at all - performing gives me strength, if anything. I’m very comfortable playing solo and getting a band together for special occasions, so I’m particularly excited about my three “An Evening with She Makes War” shows coming up this November, as I’ll be able to share songs from the start of the SMW project right up to brand new songs I’m writing at the moment for my fourth album.

As a massive fan of the art of stand-up comedy, I greatly appreciate the freedom that performing solo brings, and try to make the most of it by presenting the songs in interesting ways and experimenting with physical and mental boundaries, but while playing with a band does mean you have to behave a bit more, it’s a lot of fun too.

How do you balance the gruelling life on the road whilst find the time to write new material and everything else that life throws at you?

I play 50-100 gigs a year usually, and have been lucky enough to travel to Europe, Canada and Venezuela to play my songs. I don’t find touring gruelling at all, I love travelling and I love playing my music so it makes me very happy to get to do that. It’s tough to find a balance between being away, writing new material and getting it out there but I enjoy the challenge.

The recent record includes the songs Paper Thin which features Tanya Donelly (Throwing Muses, The Breeders, Belly). How did she become involved and what was she like to work with?

I’ve been a Belly fan since I was small so when I discovered Tanya’s recent “Swan Song” series I started enthusing about it on Twitter and we got to chatting. I interviewed Tanya’s Throwing Muses cohort (and stepsister) Kristin Hersh years ago for a blog called The Londonist so when they both came to Bristol for the Throwing Muses/Tanya Donelly tour in 2014 I was invited to sing backing vocals during T’s set, after which I got brave enough to invite her to sing on my album. I’m delighted she said yes, and count myself very lucky to have her support. She’s a wonderful writer and a brilliant person to talk to.

And what can we expect from She Makes War in the future? Are there any challenges you are aching to rise to?

Right now I’m all about my “Stargazing” tour, 11 dates around the UK throughout November where I’ll be testing out some new songs and celebrating the release of my new single and video:

I’ve got all sorts of creative plans for the next year but the priority is writing songs for my next album. The art has to come first!

She Makes War heads out on tour this November: