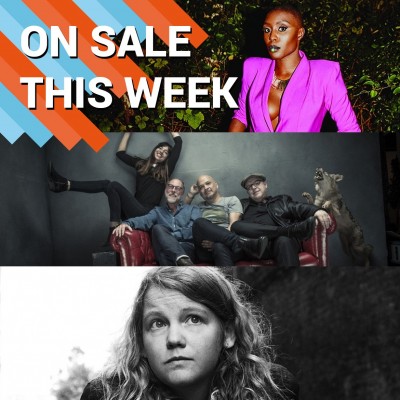 Spoken word prodigy Kate Tempest has shown an astonishing command of contemporary English having won the illustrious Ted Hughes Award and shown supreme prowess in her work in drama, poetry and spoken work performances. She has recently expanded her horizons to include music through which she uses her boundless talent to work in rap and hip hop.

Her debut album Everybody Down was nominated for the Mercury Music Award upon release in 2014. She has recently announced the name of her upcoming second album will be Let Them Eat Chaos and will form the basis for her December tour.

Brand new Pixies album Head Carrier is released in September and features the roller-coaster track Um Chagga Lagga and the schizophrenic song Talent. The two tracks certainly hold their own amongst the now legendary band’s back catalogue.

The alt rock band spread their name through college radio in the Eighties with crazed songs that blend surf music with hard rock and crazed stream of consciousness screamed vocals that set the template for American guitar music the following decade.

Laura Mvula rose to fame after writing demos on her laptop at home. From the bedroom to the mainstage, her Gold certified debut album Sing To The Moon saw her break the Top 10 and declared as Best Female Act and Best R&B Or Soul Artist at the MOBOs in 2013.

The award winning singer will be performing at the awesome Afropunk festival before touring in November to promote her brand new album The Dreaming Room.

Shrewsbury Folk Festival is the most important date in the calendar for anyone with an interest in folk. Offering a relaxed atmosphere where you can see the best in traditional and contemporary styles with live performances and late night ceilidhs.

There are also over one hundred workshops to attend that offer the chance for all to get involved whatever your age.

Celebrity performance stunt artist Steve-O is best known for his appearances on cult television programmes Jackass, its big screen film adaptations and accompanying television programme Wildboyz. From there he has taken to the stage to bring his crazy stunts to a live audience bringing him even greater infamy. You can see his mad antics for yourself when he tours at the end of this year.

Before Dante Terrell Smith Bey was Yasiin Bey he was Mos Def. The NYC rapper came to the fore in 1996 with the release of his first single Universal Magnetic. His debut album Black On Both Sides would be certified Gold and further albums The New Danger, True Magic and The Ecstatic would cumulatively sell hundreds of thousands of copies. Yasiin Bey will headline O2 Forum playing classic material from his Mos Def back catalogue.

Tunbridge Wells punk pair Slaves blasted on to the scene in 2012 when they immediately began to outshine the headline band they were supporting. Energetic and enthusing, their tongue in cheek debut album Are You Satisfied? was nominated for the Mercury Music Prize upon release in 2015. Now they are back ready to rock your world once again with follow up album Take Control.

Left Wing folk stalwart Billy Bragg will be among the first acts to play in 2017 when he tours in January with Joe Henry. Psychedelic garage rockers Primal Scream takeover Newcastle Times Square to play material from their latest release Chaosmosis as well as their greatest hits. And alternative audiences will be pleased to know Hooton Tennis Club and Blossoms will soon be on tour.

Also, metal parody band Evil Scarecrow have just announced a tour to blast off at the start of the new year.

Do not miss out on going to OnRoundhay. The family friendly festival offers plenty of activites for children including story telling with Puffin World Of Stories, the Village Green Sports Day and special guest appearences from Spot The Dog, Peter Rabbit and more. 12 year olds and younger get in free – but remember to book their ticket!

Get ready for brilliant Brighton festival Together The People. The outstanding array of acts include Brian Wilson performing Pet Sounds, Suede, The Horror, Peter Hook & The Light, Nathaniel Rateliff & The Night Sweats plus many more.

Afropunk is a celebration of diversity through exhibitions of amazing music, unique style and fresh artistic talent. It is a counterculture movement that seeks to extend education and political awareness in order to enable people to become self-empowered. Mutual respect, destroying the dehumanising stereotypes and celebrating self-expression and individuality is key to the Afropunk ethos.

Visit the magical kingdom of Arendelle for yourself when Disney On Ice presents Frozen. The Academy Award®-winning tale of true love has been reimagined into a sublime vision to behold. Now transformed into an unforgettable full length production of impeccable skating on ice, the highly popular show is coming to your town.

International mega rappers Goldie Lookin’ Chain have been raising the profile Newport since they began their hilarious hip hop careers since 2000 having released nineteen albums in sixteen years. When they’re not turning up on Celebrity Big Brother they are busting a groove to such tracks as Your Missus Is A Nutter and Guns Don’t Kill People Rappers Do.

We are very excited to be selling tickets for the phenomenal Roar. Showcasing the very latest in new talent, their exciting events transcend genres to include a whole host of many different amazing acts that promote extending equality. The shows will take place in Bristol where the headliners are Rozelle at Exchange and Nova Twins at both The Prince Albert in Brighton and Sound Control in Manchester.

We have retuning punk heroes Slaughter & The Dogs. The Manchester first wave punk band were amongst the first on the scene and have influenced such greats as The Smiths, Joy Division and The Stone Roses. We also have tickets for essential punk band Penetration. Lead by Pauline Murray, the band is too often overlooked despite releasing such savage seminal records as Moving Targets and Coming Up For Air. We also have Skyharbor tour tickets for those who are looking for a more contemporary hard and heavy sound.

Continuing with cutting edge music, check out teenage prodigy Sam Gellaitry. The Scottish producer has been driving audiences wild in the States, Canada and all over Europe. Be sure to catch him at The Steelyard in London. Chicago rapper Vic Mensa is promoting his new EP There’s Alot Going On with a gig at cool club Heaven. A precursor to his upcoming album, the EP takes an unflinching look at the tensions in America today.

And finally, inventive Massachusetts band Darlingside make their way to our shores. Plus, we have tickets for such sensation singer/songwriters as acoustic folk star Joshua Radin, the prolific Joe Purdy and Margaret Glaspy who has just released her debut album Emotions And Math.