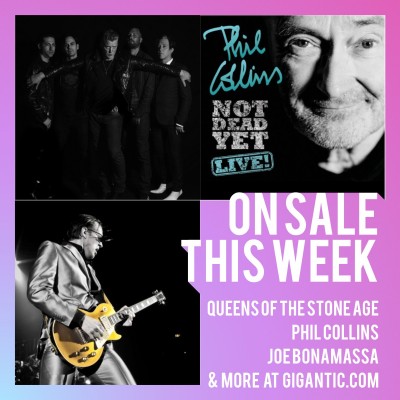 Desert rock band Queens Of The Stone Age are back with their new album ‘Villains’. It has been produced by Mark Ronson which promises to fuse their hard rock sound with an upbeat disco feel and will be one of the biggest releases of the year.

Having already successfully sold out their show at The O2 Arena, they have just added a second London show at The SSE Arena, Wembley taking place on Saturday 18th of November. Expected to sell quickly, we advise you book your ticket before they are all snapped up!

Queens Of The Stone Age tickets are currently available.

Following his time as drummer and lead singer Genesis, Phil Collins became one of the most successful solo artists of all time selling an estimated 150 million records worldwide before electing to retire at the top of his game.

The living legend returns with his newly ‘Not Dead Yet’ Tour. See him perform at Manchester Arena in November and Metro Radio Arena in Newcastle during December for what will be absolutely unmissable dates.

Legendary blues guitarist Joe Bonamassa has had an illustrious career which saw him open for B.B. King when he was aged only 12 and go on to play with the likes of Stephen Stills, Eric Clapton, Blondie Chaplin, Foreigner, Buddy Guy, Steve Winwood, Warren Haynes, and Derek Trucks.

Last year saw the release of his chart topping new album ‘Blues Of Desperation’ and now he prepares to hit the UK for an extensive tour in March of 2018 which brings him to a stage near you.

Joe Bonamassa tickets will become available at 09:00 on Friday.

Lockdown Festival is the massive weekender taking place at Powderham Castle from Friday 1st until Sunday 3rd of September where you can see such major names in dance music and grime as Wiley, Giggs and Dizzee Rascal.

Pre-pitched accommodation is available with options for luxury bedding plus more furniture. You can also elect to choose a  payment plan to spread the cost of the ticket.

TLC make their highly anticipated return with an extensive November tour in support of their brand new eponymously titled album, their first in fifteen years. Launched following a massively successful Kickstart campaign, it includes the lead single ‘Way Back’ which features Snoop Dogg. TLC tickets are released at 09:00 on Friday.

Baltimore synthpop band Future Islands have just released their superb fifth studio album ‘The Far Field’. They promote the new material with a UK tour which takes them to Manchester, Bournemouth and Norwich during November. Future Islands tickets are released at 10:00 on Friday.

We always recommend you set yourself ahead of the rest and set a personal reminder with Gigantic so you can be alerted with a text message or an email whenever your chosen event becomes available. Further events we know you will love that are released this week include:

Following a fantastic inaugural year, 2Q Festival returns to Derby and extends to Lincoln for the first time in 2018. Expect a stellar line-up of cutting edge acts.

Splendour In Nottingham is a wonderful party for the people of the city and surrounding areas featuring huge names in pop and rock.

Following his stunning headline performance bring Glastonbury Festival to a close, Ed Sheeran has announced an extensive tour playing multiple dates at Manchester, Glasgow, Newcastle, Cardiff and Wembley Stadium in London. Demand is high and tickets are going fast so be sure you book yours before they are all snapped up!

Britain’s best loved ska band Madness have thrilled and delighted audiences for over forty years. They hit the road for a summer tour in August that sees that takeover Clapham Common for their House Of Common day festival where they are joined by De La Soul and many more.

And finally, Gigantic is a great place to find all your essential gig tickets whenever you are looking for a big night out. Check out all these amazing events on sale right now: