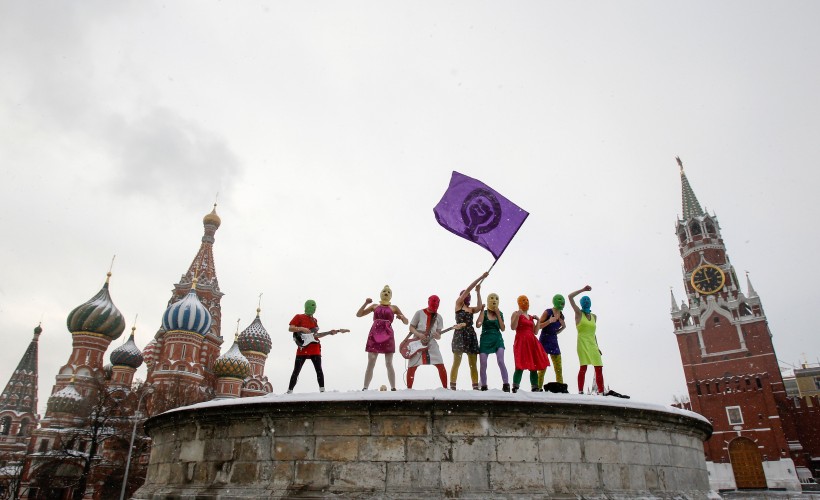 Band on the Wall, Manchester 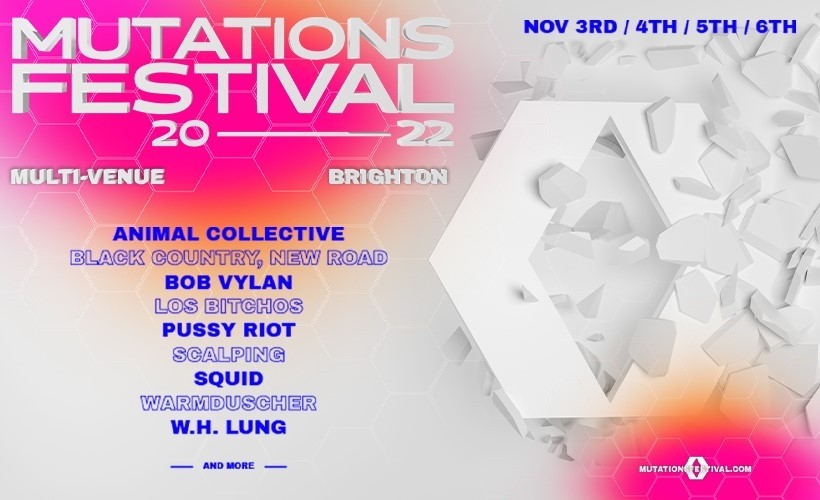 Renowned political activists and world famous punk rock band Pussy Riot are ready to hit the UK. The Russian protest art collective have one of the most important voices in recent decades who's lyrical themes include feminism, LGBT rights, and opposition to Russian President Vladimir Putin, whom the group consider to be a dictator.

Gaining global notoriety in 2012 when three of the groups members, Maria Alyokhina, Nadezhda Tolokonnikova and Yekaterina Samutsevich were imprisoned for "hooliganism motivated by religious hatred" for their preformance inside Moscow's Cathedral of Christ the Saviour, a protest directed at the Orthodox Church leaders' support of Putin during his election campaign.

Maria Alyokhina and Nadezhda Tolokonnikov were released in December 2013 (Samutsevich was freed on probation in 2012). In March 2014, Alyokhina and Tolokonnikova founded Zona Prava, an organization that defends prisoners' rights. Alyokhina is a recipient of the Lennon Ono Grant for Peace and has also been awarded the Hannah Arendt Prize for Political Thought.

“It’s Pussy Riot’s story, my story, Russia’s story,” she tells me. “It’s a story of choice. I wrote it because I think that I believe there are no heroes, and every person has a story to tell and I wanted to show that anyone can be Pussy Riot. ” - Maria Alyokhina

Out of jail and away from her house arrest for the support of Russian opposition leader Alexey Navalny, Maria Alyokhina and her infamous Russian feminist protest art collective PUSSY RIOT are coming back in the UK this October and November to perform Riot Days Live.

Following a hugely successful UK tour in 2019 that included a 10 night stand at Summerhall for Edinburgh Fringe, PUSSY RIOT return to the UK at a very poignant moment for world affairs, with a revised show that now spans the prosecution of political prisoners, and Russia's aggression against Ukraine.

Pussy Riot gaining global notoriety in 2012 when five members staged a Punk Prayer performance inside Moscow's Cathedral of Christ the Savior, resulting in the imprisonment of Maria Alyokhina, Nadezhda Tolokonnikova, and Ekaterina Samutsevich.

Continuously unwavering in their highly charged and political ideology, Pussy Riot’s music is based around feminism, LGBT rights, and opposition to Russian President Vladimir Putin, whom the group considered a dictator.

Originating as the theatrical accompaniment to Maria’s memoirs of the same name, the Pussy Riot : Riot Days show has toured the world and is an innovative combination of live punk rock, theatre and film, delivered with a highly personal narrative from Maria Alyokhina. Far from being a conventional gig, Pussy Riot : Riot Days is instead a hard-hitting, punk spirited and encapsulating piece of art theatre.

Get Pussy Riot tickets with Gigantic!

inspirational, total respect for standing up to Putin's regime

Verified purchase
Correct Use Of A Sunday Afternoon

Correct use of a Sunday afternoon. Watch the sun set over the magnificent decaying ruins of the West Pier (how do the starlings DO that?!) then across the road to Pool Valley, to The Haunt, for the sold out Sunday matinee of 'Riot Days', a one hour mix of music, movie and punk propaganda led by Maria Alyokhina, one third of Russian agitprop collective Pussy Riot. I'd feared the worst, that it would be something of an incoherent mess. Far from it! The cleverly joined-up piece narrates the lead-up to, and execution of a demonstration against the Putin-led Russian State and Orthodox church in a Moscow cathedral in February 2012 in the run-up to the following month's election, the subsequent trial and imprisonment of the band, and the relentless challenging of the prison authorities for convicts to be treated as human beings with basic human rights, as told from the viewpoint of Alyokhina. It's sparse, grinding and spell-binding and the all-Russian narration adds beautifully to the harshness of the piece (there's English subtitles on the accompanying movie - even if the low slung venue meant that was ALL you could see of the movie). In the end it's about not letting the bast*rds grind you down, or as Alyokhina puts it 'to back down an inch is to give up a mile'. Punk's not dead, it just evolved.

That's all we have for Pussy Riot! Check out their upcoming shows