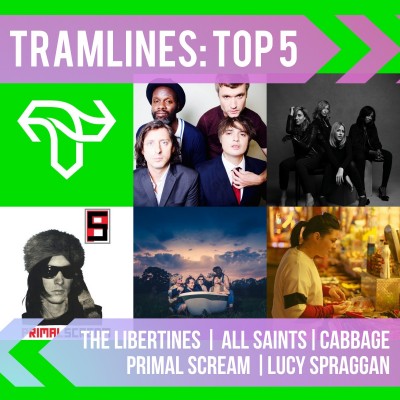 The city of Sheffield has long enjoyed a fine reputation for its rich musical legacy producing some of the biggest names in rock and pop over the decades. Tramlines is the annual metropolitan music event bringing the streets to life for one enormous party.

The festival combines big names with cutting edge acts and offers a rich diverse mix of genres with everything from rock to rap, house and folk. This year the awesome line-up includes the likes of Don Letts, Kano, Akala, Spring King, Estrons plus many more!

With the big weekender fast approaching, we take a look at the Top 5 acts playing Tramlines 2017.

Get ready to once again sail on the good ship Albion as its time for London heroes The Libertines. After revolutionising British rock and roll with the release of debut album ‘Up The Bracket’ in 2002 the band quickly imploded amid high profile scandals involving bust ups, prison sentences and drugs.

After a period of separation which saw Peter Doherty lead Babyshambles whilst Gary Powell and Carl Barât members formed The Dirty Pretty Things, the original members would reunite in 2010 and have since released their latest record ‘Anthems For Doomed Youth’.

Wild and chaotic, you never quite know what you’ll get at the likely lads show but one thing is for certain; it will always be remarkable!

All Saints emerged in a decade obsessed with pop bands. But were-as others were short lived cynically marketed products bereft of any musical talent, Melanie Blatt, Shaznay Lewis the Appleton sisters Nicole and Natalie drew on their love of R&B and stood apart from all the rest.

In 1997 they released their eponymously titled debut album which featured the three NO. 1 singles  "Under the Bridge"/"Lady Marmalade", "Bootie Call" and "Never Ever", the latter of which saw them take home the BRIT Awards for Best British Single and Best British Video. They released follow up album ‘Saints & Sinners’ three years later which hit No. 1 and has been certified multiplatinum. To date, they have sold 12 million records worldwide.

Few bands still exist that extend as much influence as Primal Scream. Born out of the emerging C86 indie scene in the mid 80’s, the Glasgow gang would explode shortly after the turn of the decade being amongst the first to create a new synthesis of acid house and rock on their Mercury Music Prize winning album ‘Screamadelica’.

Led by former drummer of The Jesus And Mary Chain Bobby Gillespie, their relentless exploration of sound has seen them continue to experiment with everything from country to blues and industrial rock over a career which spans over three decades and eleven studio albums.

Last year saw the meteoric rise of agitational punk band Cabbage. Their oddball humour combined with savage attacks on the status quo chimes with a generation at odds with an establishment presenting an ever-bleaker future.

Following their explosive debut EP ‘Le Chou’ came their rough and ready first album ‘Young, Dumb And Full Of…’ which Drowned In Sound describe as “Primitive yet effective” which became many collector’s first choice when re-issued for Record Store Day.

Lucy Spraggan has come a long way since her days as a contestant on The X Factor in 2012. Immidiately marking herself different from the rest, Spraggan confidently performed her very own composition titled ‘Last Night’ rather than perform a cover. Her audition video has now been viewed a staggering 35 million times on YouTube.

After selecting to remove herself from the competition, she was quickly signed to major label Columbia Records and has released four hit albums including her latest ‘I Hope You Don’t Mind Me Writing’ which was released at the beginning of the year.