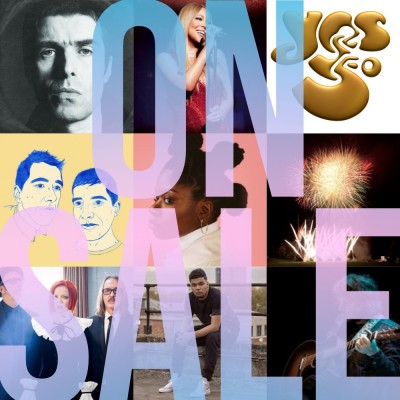 Arguably the greatest frontman of all time, Liam Gallagher rose to prominence in the 90’s as the bold and brash singer of Oasis. Combining boundless confidence with the ability to connect to audiences in their many thousands, Gallagher has undoubtedly reached iconic status.

With the implosion of Oasis and following on from his other band Beady Eye, our LG prepares to release his first solo album ‘As You Were’. Do not miss out as tickets will not be around for long!

Liam Gallagher tickets will become available at 10:00 on Friday.

Let’s face it, it isn’t Christmas until you’ve heard Mariah Carey belt out her huge hit ‘All I Want For Christmas Is You’. Join her on a festive tour which takes her to Manchester Arena and The O2 Arena in London for two very special headline shows.

Mariah Carey tickets will become available at 09:00 on Friday.

Celebrating 50 years since they first took to the stage, progressive rock pioneers YES have just announced a UK tour for 2018. Catch them playing hits from the whole of their incredible career at Bristol, Sheffield, Glasgow, Manchester, Gateshead and Brighton.

YES tickets will become available at 10:00 on Friday.

Join all your many favourite cartoon characters with Disney On Ice presents Passport to Adventure. Prepare to be whisked away to the timeless worlds of Disney’s The Lion King, The Little Mermaid, Peter Pan plus Disney’s Frozen, to be enjoyed by the whole family.

Garbage celebrate the twentieth anniversary of their seminal second album ‘Version 2.0’ by performing the record in full, plus further selected songs, at O2 Academy Brixton in September. Garbage tickets will become available at 10:00 on Friday.

We really do advise you to set a personal reminder with Gigantic right now. Then, you can be alerted with a text message or an email as soon as they become available which sets you ahead all the rest.

Gigantic always has a huge number of great acts, events and experiences coming on sale. Check out all these essential tickets coming on sale this week:

110 Above have just released Super Early Bird tickets for their festival in 2018. Take advantage of the discounted prices, but be quick as they will go!

Bentley Farm at Tamworth will once again play host to the amazing Warton Music Festival. Tickets for 2018 are just about to be released.

Warton Music Festival tickets will be become available at 09:00 on Friday.

Gamers will all be after getting tickets for Ready Player 3. The live gaming event features the hosts from YouTube show Game Grumps and Jacksepticeye and takes over Cardiff Motorpoint Arena and O2 Apollo Manchester during October 2017 - Just Press Start!

Last year saw the release of Texan country star Micah P Hinson’s stunning new album ‘Broken Arrows’. This year he makes the leap across the pond to make an extensive UK Autumn tour which takes place in September and October.

And finally, Gigantic always has all the essential gig tickets you could ever need. Check out all these great events that you could be attending: