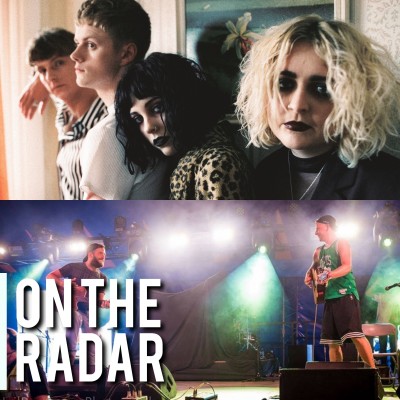 Drawing on the airy sound of dream pop but applying plenty of nu goth sass, Pale Waves are the newly emerging cult band everyone is falling in love with. Taking an unashamed radio friendly feel to songs with real substance, they look set for world domination by the end of the year.

Signed to the label Dirty Hit, fellow label mates and Mancunians The 1975’s drummer George Daniel and singer Matty Healy couldn’t help but get involved and convinced Pale Waves to let them produce singles ‘Television Romance’ and ‘There’s A Honey’.

Singer Heather Baron-Gracie was enthused by their production work; “They’re amazing producers so when they got in contact with us and said ‘We’ve heard ‘There’s A Honey’ and ‘Television Romance’, we wanna produce it if you’d let us’, we were like ‘Of course! Yeah, go for it’. So we started that, and ever since then it’s worked really well. We’re just gonna carry on.”

Working so closely created a real bond between the bands and Pale Waves were invited to open for 1975 at a monumental show which took place at the iconic Madison Square Garden in New York.

“It was pretty surreal,” explains Heather “We were all very, very nervous, pretty much every night but it was fantastic and their fans are just so into anything and ready to hear new music so it was great. Any band would kill for that opportunity.”

Do not miss your chance to catch them when they head out on the road this October when they play some of coolest independent venues found throughout Britain.

SHOWHAWK DUO is the work of guitarists Mikhail Asanovic and Jake Wright. Breaking down all expectations of what acoustic guitaring should be, the boys take apart classic funk, rock and even techno tunes and reinvent them in their very own unique style. Their classic training enables them to pick apart all your favourite bangers and somehow make them yet more powerful. Check out debut record ‘ADM – Acoustic Dance Music’ which they released in 2015 and promoted with sell out shows.

Starting out as buskers, Wright and Asanovic music has taken them all around the world and established them as festival favourites having performed as Kendall Calling, Boomtown, Wilderness, Secret Garden Party and Glastonbury.

The pair have become an internet sensation after their charity performance at parish church Tron Kirk in Edinburgh during 2013 went viral. It has now received a staggering 1.4 million views and continues to be as popular as ever!

Now they have even featured on BBC Radio 1’s after being invited by Nick Grimshaw to appear on his Breakfast Show. It seems like their rise to the top is unstoppable.

SHOWHAWK DUO have just announced their intentions to head out and tour during spring of the new year. Tickets will fly off the shelves so be sure to set your personal reminder right now.

SHOWHAWK DUO tickets can be yours from 09:00 on Friday.