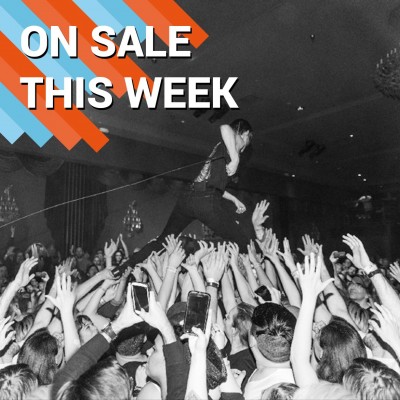 After taking a bit of time off Biffy Clyro have made their return with one of the most eagerly awaited album releases of the year. Ellipsis was recorded in sunkissed West Los Angeles to capture something exotic. The new album features the singles Wolves Of Winter, Animal Style and Howl.

Keen to play the new material live, Biffy Clyro will headline at Barclaycard Arena at Birmingham and The O2 Arena in London this December.

Revellers at the recent V Festival just last month were treated to a vast array of the biggest names in pop and rock including Sia, Jess Glynne, Faithless, Kaiser Chiefs, David Guetta, Rihanna and the one and only Justin Bieber.

If you are ready for more excitement then V Festival 2017 tickets are on sale right now. If you act fast there is a sale on Weekend tickets that ends at Midnight Friday! (02/09/2017)

Art rockers Savages have fast become an essential cult band. Their debut album Silence Yourself burst into the Top 20 and was later shortlisted for the Mercury Music Prize. This year saw the release of their vital second album Adore Life.

The stylish post punk quartet have just announced two nights this November to take place at The Nick Rayns LCR at Norwich and O2 Academy Brixton in South London. We don’t expect the tickets to be available for long so book early!

Frank Turner And The Sleeping Soul

Following the release of last year’s stunning album Positive Songs For Negative People, Frank Turner is joined by his band The Sleeping Souls for a tour towards the end of 2016. The record impressed both critics who gave it rave reviews and the buying public who sent it to #2 in the charts.

Click HERE for your Frank Turner And The Sleeping Soul tickets.

Post hardcore band Lower Than Atlantis are getting ready for their Spring tour in 2017. The dates in March mark ten years since the start of a career which has seen the Watford band become favourites of the critics and reach a worldwide audience with a large fanbase in the States. The extensive tour should feature material from their entire awesome back catalogue including albums Far Q, World Record, Changing Tune and Lower Than Atlantis.

With the impending release of fifth studio album Mapping The Rendezvous this Autumn, Courteeners will be playing spectacular shows in November. Featuring the recently released single The 17th, the forthcoming album was written in Paris and recorded at Bath, Manchester and Loch Ness.

Indie audiences will also be excited to hear that Reverend And The Makers are giving their tunes an acoustic reworking. The Sheffield troupe are already famed for their eclectic influences making for some sensational songs. Tickets for their stripped down set go on sale at 09:00 on Friday 2nd of September.

Love them or hate them. Loud mouth Jason Williamson and fellow troublemaker Andrew Fearn must be doing something right as Sleaford Mods are being given another night at the legendary venue Rock City in their adopted home of Nottingham due to popular demand. The announcement comes following the original gig selling out with the rest of the tour dates expected to go very soon. Grab them while you can!

Gigantic enjoys a reputation of being on the cutting edge of contemporary music with an ear for the exciting. So we are really looking forward to the ticket launch for a whole host of international electro enthused artists about to come on sale including award winning Parisian producer Wax Tailor bringing his unique Trip Hop to the UK and French DJ crew Birdy Nam Nam who take turntablism to a whole new level. Plus, American Hip Hop outfit Twenty One Pilots playing at Alexandra Palace in London after appearing on the soundtrack to recent summer movie smash Suicide Squad with the song Heathens.

Following the announcement that The Gaslight Anthem have entered an indefinite hiatus, the band’s singer Brian Fallon has recruited new band The Crowes. Readying themselves for their extensive world tour, Brian Fallon & The Crowes will be performing material from the new album Painkillers. Scottish singer / songwriter King Creosote will be kicking off 2017 with a January tour and Conor Oberst will be playing an intimidate solo performance at London Palladium in February.

We also have Brighton based blues singer Rag N Bone Man about to release tickets for his November tour. His powerful voice is complimented with smooth soul backing singers and modern beats to create something truly wonderful.

Surviving members of Thin Lizzy Scott Gorham and Brian Downey reunited in 2012 to form amazing new band Black Star Riders. Not only have they just made the announcement of third album Heavy Fire, they have also announced their highly anticipated upcoming tour to promote the release. Rock fans will also be thrilled to hear that Clutch will be hitting a stage near you in December.

Also just about to be released, tickets for Birmingham soul band St. Paul And The Broken Bones and D'Influence will be performing in London at Jazz Café.

Shoegaze supergroup Minor Victories started off as a small side project for Editors guitarist Justin Lockley. However, after recruiting his brother James, Slowdive’s Rachel Goswell and Stuart Braithwaite of Mogwai the project took on a life of its own including the release of the superb eponymously titled debut album which is tipped to top many of the music presses Albums Of The Year polls. Get your tickets for their show at O2 Academy2 Oxford this December.

Fans of indie will be pleased to know tickets are currently on sale for Brighton band Fickle Friends for when they tour in November.

We have a wide range of amazing rock groups from all over the globe such as punks Beach Slang and emo band Modern Baseball – both from Philadelphia! Check out the massive sound of Finnish rock band Daniel Lioneye when they tour new album Vol. III. Plus, we have homegrown talent in the form of Scottish rockers Big Country and Newport’s finest alternative metal band Skindred.

And finally, check out our Blog On Afropunk and its impending date at Alexandra Palace in London.