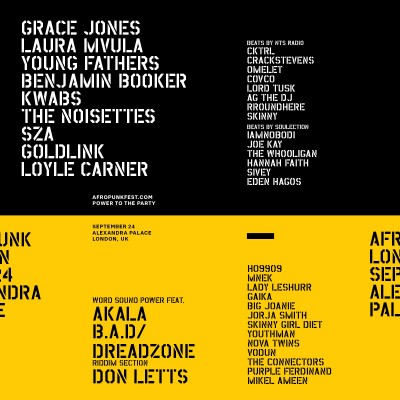 Hot on the heels of the Brooklyn/New York weekender the international festival movement Afropunk is poised ready to take over London.

Afropunk proudly works under the slogan Power To The Party! More than just a music festival, it is a worldwide celebration and commitment to the value of equality and diversity shown through creative expression. The worldwide movement exhibits fashion, arts and educational workshops with the aim of empowering yourself through their festivals erupting in Brooklyn, Atlanta and Paris before landing in London at Alexandra Palace on Saturday 24th of September. Its first ever UK date in the thirteen-year history of Afropunk!

The New York dates of the festival took place at Commodore Barry Park over 27-28th of August and brought such huge names as Ice Cube, TV On The Radio, Bad Brains and Tyler, the Creator to their stages. Check out the stunning photo coverage by Rolling Stone, The Fader and The Guardian.

With the London leg looming we take a look at some of the amazing acts you can see this September.

Effortlessly cool and with impeccable style. Ladies and gentleman; Miss Grace Jones. The Jamaican supermodel first began releasing music after signing to Island Records in the mid-seventies. Her enigmatic personality leant itself well to R&B enthused disco and she soon began synonymous with such hits as Nightclubbing, Living My Life and Slave To The Rhythm.

After sending out demos recorded at home on her laptop, Laura Mvula was snapped from the streets of Birmingham to become one of the UK’s most recent leading lights in music. Her Gold selling debut album Sing To The Moon has recently been followed by the highly praised record The Dreaming Room which looks set to top many critics lists for Album Of The Year.

You cannot argue with success. And there is no bigger achievement for contemporary musicians than the coveted Mercury Music Prize which was claimed in 2014 by Young Fathers with their astounding debut album Dead. The big beat hip hop trio have since collaborated with Massive Attack and awed critics with second album White Men Are Black Men Too.

Benjamin Booker is the purveyor of Virginia Beaches finest blues rock. His explosive guitar playing, exceptional knack for song writing and unique voice all combine to make one truly talented young rock and roller. His raw sound is the perfect antidote to the boring same-old fashion bands that jam the airwaves.

Kwabena Adjepong goes by the name of Kwabs when thrilling audiences with his extraordinary baritone voice. The soul singer enjoyed performing in the National Youth Jazz Orchestra where he was the lead singer before studying at the Royal Academy Of Music. Since the release of his debut EP Wrong Or Right in 2014, Adjepong has been nominated for Best Newcomer at the MOBOs, been shortlisted in the BBC’s Sound Of 2015 poll and released his debut album Love + War.

Other great acts include The Noisettes, Sza, Goldlink and Loyle Carner. Plus, there will be a vast array of awesome DJs such as CKTRL, Crackstevens, IAMNOBODI and many more. With so many great names it has all the makings of an unmissable event so get your tickets before they are gone!