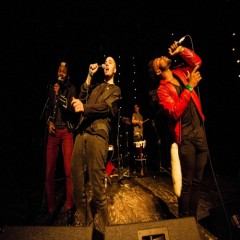 Young Fathers - GET UP

Young Fathers - GET UP

With demand so high, we expect Young Fathers tickets to sell very quickly - so make sure you book yours before they are all gone. Gigantic makes booking your favourite gig tickets easy as you can place your order 24/7 in the comfort of your home or while on the go using your smartphone, computer or tablet.

As everyone is after them, we highly recommend you set a personal reminder right now, so Gigantic can alert you with an email or text message when they become available at 09:00 on Friday 3rd of November.


Young Fathers formed in 2008, and recorded their first album, Inconceivable Child... Conceived, with producer Timothy London at his studio in Edinburgh. "Straight Back on It," their first single from the album, released on Black Sugar Records, was well received. The NME dubbed the band "locked somewhere between De La Soul and 3T, but re-imagined for the hipster generation."

Framing themselves as a "psychedelic hip hop boy band," Young Fathers spent the next three years touring the UK and Europe. During this time they released another single, "Automatic," appearing on Channel 4's Big Brother's Big Mouth in 2009 and performing at T in the Park, Creamfields, Wakestock, Belladrum and Sónar amongst other festivals, as well as main support on tours with Esser and Simian Mobile Disco.

By the end of 2011 Young Fathers had left Black Sugar Records. They released a mixtape, Tape One, as a free download and limited edition cassette in November 2011. Tape One showed a maturing group, developing their sound in a darker direction, very percussive with a heavy emphasis on bass. London's Time Out put the group in their top ten "best new acts to watch out for in 2012."

Young Fathers have continued with sporadic concerts through 2012, gaining support from BBC Radio 1 DJs Vic Galloway, Ally McCrae and Huw Stephens and favourable reviews on blogs such as Glasgow Podcart, RCRD LBL, Listen Before You Buy, Creamteam, and Popstache.

In September 2012, Young Fathers signed to Anticon. The band re-released Tape One on the label in January 2013.

On 20 June 2014, Young Fathers won the 2014 Scottish Album of the Year Award for their 2013 EP Tape Two at the Barrowlands Ballroom in Glasgow. On 29 October 2014, they won the prestigious 2014 Barclaycard Mercury Music Prize for their debut album Dead which also achieved commercial success, easily breaking the Top 40
It was followed a year later by their awesome second album White Men Are Black Me Too.

We are very excited to be able to offer you Young Fathers concert tickets. However, as supplies are limited you will need to be quick of the mark and book yours before they are all snapped up. Gigantic is on hand, providing excellent customer service in helping you choose from a truly vast range of essential tickets which ensures you will enjoy your big night out.

Young Fathers have been picked by M.I.A. for Meltdown 2017

Young Fathers To Perform At Afropunk

Be Sure To See Young Fathers Play At Truck Festival