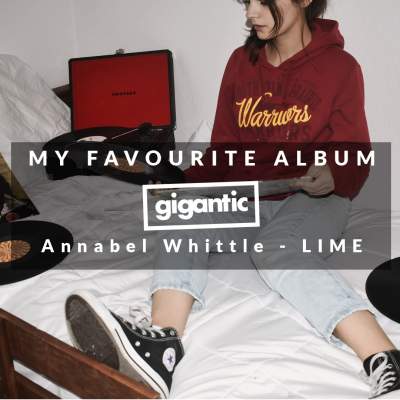 Our never-ending quest to compile the perfect record collection continues with the My Favourite Album blog and this week we are hearing from Annabel Whittle – drummer from rising stars LIME!

Channelling 60’s surf pop and infusing infectious riffs with riot grrl attitude; LIME met as students at music college and the Brighton based band are already attracting the favour of the tastemakers with their killer single ‘Surf N Turf’ getting some prominent airplay on 6Music.

Keep your eye on this high energy fourpiece who are hotly tipped to tear it up at a venue near you (just as soon as we get COVID out of the way) plus expect another awesome single very soon!

‘White Men Are Black Men Too’ by Young Fathers

I heard it a couple of years after it was released. One of the songs was in Trainspotting 2, and being from Edinburgh, I guess I always associated it with Scotland. I moved to England shortly afterwards and I guess it kind of summed up the feelings of moving away, and also how much I realised I valued where I was from after moving to a shitty English town. I’m very lucky to have lived in pretty amazing city, and this album sort embodies growing up there for me.

I’m still yet to find anything similar to their music or anything that manages to capture that nostalgia but also looking forward, if that makes sense? Its super emotional but also makes you want to get up and do something. Blends anger and inspiration really well. It’s also still so relevant. The band are outspoken about the right issues for a reason, and I have huge respect for them for saying it how it is.

Probably ‘Dare Me’, ‘27’ and ‘Nest’. The lyrics of ‘Dare Me’ are super relevant now and very powerful. ‘Nest’ reminds me of my first serious relationship, guess I must have been listening to it non-stop around that time, so it’s one of those songs that sounds like that feeling even though I’m not too sure that’s what the lyrics are about...

I saw them at the O2 in Brixton a couple of Christmases ago with a friend and I think we were the only people dancing, but it was one of the best gigs I’ve been to. Wish I could relive it. It was immense in a venue that size.