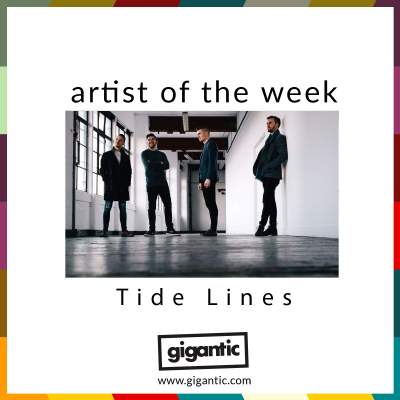 Joining rousing anthems with a nostalgia for impassioned love and reckless abandon, Tide Lines are the bold fourpiece band echoing from the romantic wilderness of the Scottish Highlands, capturing the hearts and ears of listeners right across the world.

Their Scottish identity is key to their sound, as head on their debut ‘Dreams We Never Lost’ and Top 20 album ‘Eye Of The Storm’ which was released in 2020 which they tour next year.

Formed in 2016, the rise of Tide Lines was nothing short of meteoric as listeners chimed with their blend of rousing indie rock with traditional Celtic sounds and their very first single ‘Far Side Of The World’ immediately began amassing significant numbers of streams and downloads.

It would feature on their debut album ‘Dreams We Never Lost’ which saw them enlist the aid of Anthony Thistlethwaite of Irish rock band The Saw Doctors to truly reach the impassioned heights of their live shows. It’s release in 2017 signalled the true arrival of a band ready to capture the imagination of a new generation.

In 2018, their rise continued with the release of their ‘Let’s Make Tonight’ EP before being named “the Rising Sound of Scotland” the next year at the Nordoff Robbins Scottish Music Awards. They were awarded the title shortly after playing a significant show at a packed out Barrowland Ballroom which had sold all 1900 tickets in just five minutes!

They followed their evocative debut album with brand new record ‘Eye Of The Storm’ earlier this year. Their self-released second album saw them return to the heartlands to record what would become their biggest success to date!

“It was a similar process in that we recorded it all ourselves between a studio on the Isle of Lewis and a studio in Glasgow; and then mixed it through in Castlesound Studios in Edinburgh. But we took a lot more time over this one - 3 years, in fact, from the writing of the first song to the release. The first album was more rushed because we were desperate to get our own songs out there when we’d just started out. So, once we’d done that, in 2017, we were keen to take a bit more time on our second. It feels great now to have it out there. The release process, of course, was completely different thanks to COVID-19 and relied a lot on social media in the absence of live gigs.”

Despite the limitations placed on them by the corona lockdown, the boys were still able to burst through the barriers and reach their avid audience with fans sending their second album ‘Eye Of The Storm’ rocketing up the charts – hitting a remarkable 12 in the UK Album Charts plus topping both the Scottish and Independent charts too!

Eager and ready to hit the road once again; Tide Lines have announced headline dates in support of their incredible album ‘Eye Of The Storm’ where they will show off the new material plus play your fav tracks during April ’21. Tickets are already selling fast so be sure to grab yours with Gigantic, or you might just miss the tide.