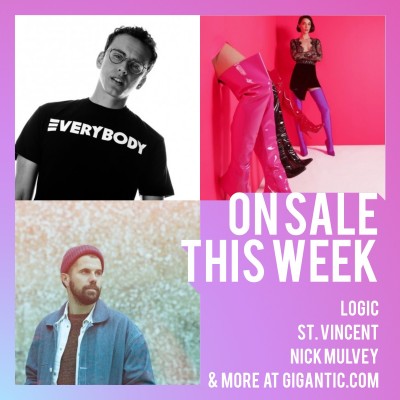 Fresh from conquering Glastonbury where he captivated the whole festival with his loop sampling skills, amazing song writer Ed Sheeran now announces a huge headline arena tour which takes him to Manchester, Glasgow, Newcastle, London and Cardiff in 2018.

Earlier in the year, he released his best-selling third album ‘÷’ which shot to No. 1 in charts around the world including New Zealand, France, Spain, Germany, the United States and at home in the UK. Don’t miss your chance to see the incredible musician play live for yourself.

Ed Sheeran tickets go on sale at 10:00 on Saturday.

Penn Festival has amassed such a strong line-up of acts for their phenomenal weekender at The Big Park in Buckinghamshire. Mixing the very best of rock, indie and dance music, you can see Primal Scream, Sigma, Wilkinson, The Charlatans and James all on the same bill.

Take advantage of the Pre-Pitched accommodation on offer, complete with options for a Luxury Bedding Set allowing you to rock up and camp in comfort. They also offer a Payment Plan allowing you to break down the cost into monthly instalments.

Live From Times Square hosts a huge amount of world class acts in the very heart of Newcastle. Look forward to seeing some of the biggest names in dance and rock including Jake Bugg, James, The Libertines, Brian Wilson playing ‘Pet Sounds’, Leftfield, Manic Street Preachers and Haçienda Classical.

Tickets for these essential events are going fast so don’t delay and book yours today.

Maryland rapper Logic has just released his stunning third studio album ‘Ξverybody’. Sure to please fans, it includes the massive singles ‘Everybody’, ‘Black Spiderman’ and ‘1-800-273-8255’. Catch him when he plays his huge shows at Manchester Academy and O2 Academy Birmingham during November. Tickets for the shows go on sale at 09:00 on Friday.

St. Vincent is one of the world’s most dynamic and exciting creative artists for a generation and her work has seen her take home the Grammy Award for Best Alternative Music Album, the second ever female artist to do so, for her most recent eponymously titled record. Tickets for her show at O2 Apollo Manchester go on sale at 10:00 on Friday.

The demand for both acts is absolutely huge so set a personal reminder with Gigantic right now. This sets you ahead of the rest by alerting you with a text message or an email when they become available.

Gigantic always has the very best gig tickets as they are released. Check out all these amazing events also going on sale this week:

Disney On Ice Passport To Adventure

Celebrate the magic of your favourite Disney Tales. Disney On Ice Passport To Adventure comes to an arena near you.

Disney On Ice Passport To Adventure tickets are currently available.

Madness welcome you all to the House Of Common. Joining them will be De La Soul, Soul II Soul and many more.

Designed with children in mind, Gloworm Festival is special fun for all the family.

Families of the city and the surrounding areas look forward to the celebrations at Woolaton Park for Splendour In Nottingham.

Gathering together a mighty line-up of cutting edge acts like Black Honey and Sundara Karma, 110 Above Festival is an unmissable weekend.

Offering Lightening Seeds, The Bluetones, Black Grape and Reef, indie fans need to get themselves to Beano On The Sea.

Jen Cloher has proved to be one of the world’s most exciting contemporary folk rock artists and her eponymously titled debut album is expected to be one of the biggest record releases of the year. Catch her when she plays London and Salford in September.

Sensational singer / song writer Emily Barker releases brand-new album ‘Sweet Kind Of Blue’ this year. She promotes this highly anticipated new material with a November tour which brings her to a stage near you.

And finally, Gigantic always has a huge range of essential gig tickets. We know you will be excited by the following: