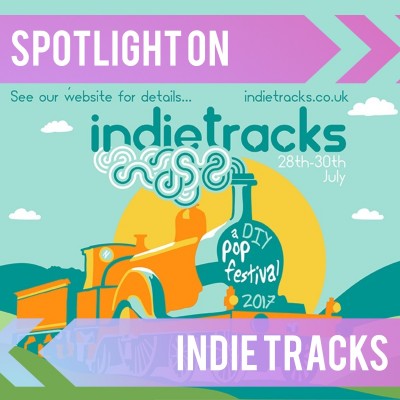 Each year, fans of the weird and wonderful make their way to Midland Railway Centre at Ripley in Derbyshire for Indietracks. The festival is three-day celebration of truly alternative music and DIY culture which showcases some of the most original acts in the world.

This summer sees the ultimate indie pop event celebrate its eleventh year with an incredible line-up comprised of fifty well established or cutting-edge artists, all of them hand-picked for their unique style and each offering a sound unlike any other.

Getting you in the mood for the good times, festival organisers diligently put together a compilation of all the awesome music you can look forward to. Indietracks 2017 has just been released and features 44 tracks of the various acts who will be the soundtrack of your big weekend which is available to download and buy HERE right now.

With all the excitement building for what promises to be a wonderful weekend, Gigantic takes a look at some of the best bands and artists you will be enjoying 28 – 30th of July.

Brimming with attitude and injecting political subversion into their bright yet brash guitar led tacks, County Durham punks Martha are the quintessential Indietracks band. Having played a number of times before, they can claim that this summer will be somewhat of a homecoming gig and their perfect bend of witty sardonic lyrics and infectious rhythm is sure to go down well with attendees.

When it comes to indie there cannot be a more definitive band then The Wedding Present. Born out of the mid 80’s, the Leeds band grew thanks to the loyal support of university students everywhere who would flock to their every gig. By taking a largely stripped-down approach to the sound and playing each song at a breakneck speed The Wedding Present have retained a timeless feel and continue to be discovered by each new generation.

Since their arrival onto the scene in 2010, Joanna Gruesome have proved to be a vital part of British underground rock with their two albums ‘Weird Sister’ and ‘Peanut Butter’ being absolutely essential for any serious record collection. The Cardiff band claim to have met during anger management classes which, given the frantic fury exhibited in their music, we can well imagine is total true!

Perfectly quirky Cate Le Bon takes pop to its experimental edges yet always retains a radio friendly appeal. Often switching between singing in Welsh and English, her voice possesses an ethereal quality which can be both haunting and yet also very human through being so delicate. Though she may now have skipped across the pond to live in LA she has been drafted into coming home to work with the likes of Matt Davies, Gruff Rhys and Manic Street Preachers.

Bluesy three-piece The Wave Pictures pen charming and witty songs that document the tragedy of doomed romance. The Leicester lads work at a ferocious rate, their prolific output has seen them release a staggering fifteen studio albums over twelve years releasing both ‘A Season In Hull’ and ‘Bamboo Diner In The Rain’ just last year.