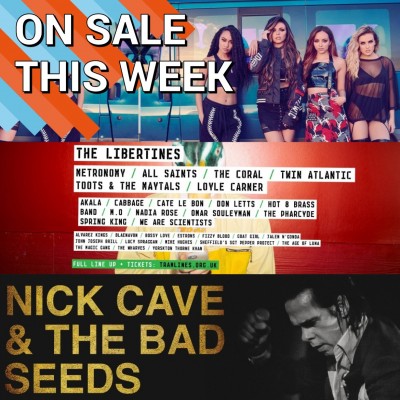 We have always been big fans of Tramlines. The three-day city festival always transforms the streets of Sheffield into one big party as revellers take their pick of the various awesome stages each offering their own incredible line-up. But this year looks particularly amazing.

They announced the first confirmed acts at the beginning of the week and thrilled everyone with a roster that includes indie icons The Libertines, rising hip hop star Loyle Carner, amazing electronica from Metronomy, the return of R&B girl group All Saints and many more!

Britain’s best loved 2 Tone heroes Madness formed in 1976 and led the way for the ska revival. Fronted by their singer Suggs, the enigmatic eccentrics are known as much for their oddball antics as their upbeat songs perfect for skanking.

With the scorching summer fast approaching (Honestly!) they have announced a trio of terrific outdoor dates at Scarborough, Falkirk and County Durham. Each show promises to be a wonderful way to enjoy those hot days! Plus, they headline Lytham Festival.

Nick Cave And The Bad Seeds

Dark and brooding, Nick Cave And The Bad Seeds remain a constant creative force. Their songs are beguiling tales of loss and pain explored through bleak ballads and gothic post punk written with such precise poise and exquisite expertise.

Following the release of their fifteenth studio album Skeleton Tree, Cave an co. have announced an arena tour which is expected to be both intimate and compelling. “We’ve been in a strange place, I’m coming out and blinking into the light… It’s good to be playing again.”

Click HERE for your Nick Cave And The Bad Seeds tickets.

After finding fame on televised singing competition The X Factor, Little Mix became overnight international superstars. Their flawless pop performances won them they eight series and has seen them dominate the charts around the world ever since.

Having enjoyed yet another massive year which saw the release of their latest record Glory Days, Little Mix are ready to rock your world once again. Join them on tour this July and enjoy hearing all their hits live!

Celebrating the 10th anniversary of the release of their debut album A Guide To Love, Loss & Desperation, The Wombats have announced an extra special show at O2 Academy Brixton to commemorate the release and celebrate their continued success. Tickets are released on Friday.

Kaiser Chiefs have remained close to the hearts of their huge fanbase ever since they burst onto the scene in 2000. Not only will they headline the festival Splendour In Nottingham and play at Uttoxeter Racecourse, they have just announced a date at Scarborough Open Air Theatre.

Gigantic always has all the essential gig tickets you could ever need. Further events going on sale this week include:

Exhilarating annual music festival Standon Calling has been attracting cool kids for over a decade with is constantly strong roster. This year their stunning line-up includes headliners Orbital and Clean Bandit plus the likes of Laura Mvula, Gary Numan and Slaves.

Since it was first started by brothers Robin and Joe Bennett in 1998, Truck Festival has been a beacon for the brightest and best alternative music. This July, The Libertines, Franz Ferdinand, The Vaccines, Jagwar Ma and many more perform at Hill Farm.

British summertime just wouldn’t be the same without the good old music festival. Other events you should definitely check out are Lytham Festival and Camden Rocks.

Having written music for over 150 feature films such as Inception, Gladiator and The Dark Knight Trilogy, Hans Zimmer has certainly proved that he is a composer of note. The award-winning master musician makes what will be a spellbinding performance at SSE Hydro in Glasgow on Sunday 18th of June.

Platinum selling rock and roller Shakin’ Stevens has bombarded the charts with over thirty Top 40 hits including Oh Julie, Green Door and This Ole House. He takes his most recent record Echoes Of Our Times on tour in spring.

And finally, Gigantic always beings you the very best events available. Also on sale we have;