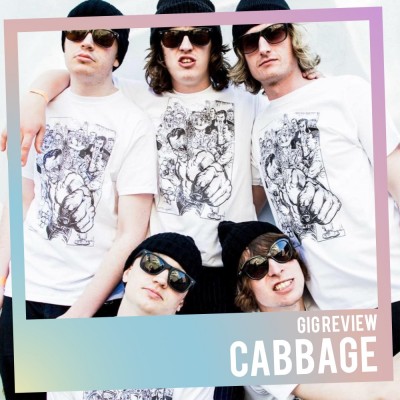 Whilst Britain is currently enduring a vegetable shortage it seems almost too good that the new in-demand band are called Cabbage. The Mancunian grot garage band seemed to appear from nowhere and almost as quickly have gone from being some critics fav new thing to the band its cool to kick.

Unfairly, they have been saddled by sloppy journalism with the reputation of being the northern Fat White Family pretenders which was perhaps exacerbated in people’s minds when recent single Uber Capitalist Death Trade was placed on heavy rotation be BBC 6 Music. Not that there is anything wrong with the song, true it may owe a bit too much to Dead Kennedys but it still remains a blisteringly hot punk song that doesn’t fail to excite. However, the song does little to give a true account of the band’s sound.

Rapid twists on the knobs of analogue delay pedals to create accelerating pulses building huge walls of cacophonies distortion that are accompanied with polemics and tales of nauseating school kitchen class war which all clearly strikes a chord with the audience. Random kids somehow hoist themselves aloft and begin crowd surfing, half-drunk beers are thrown across the room and a surprising amount of the sold-out crowd scream every word of the set.

The set rises to the euphoric participatory thrill of a mass protest. The last song sees every single person sing in unison; “I was born in the NHS. I wanna die in the NHS!” before it all ends. No gimmicks or silly pre-planned encores. The came. They saw. They spat beer on their adoring audience and walked off confident in the knowledge they are a band on the up.

Speaking to triumphant singer Lee Broadbent still wildly exuberant after the gig, I mention how I was pleased to discover, fun though it would be, that they weren’t just another punk band and the sort of insane sonic experimentation they implement reminds me of Butthole Surfers. He grins, evidently pleased and declares; “They’re my biggest influence!”. Flashing me a grin, he gives me a massive hug despite having only met him two minutes ago and jumps into the van to take their chaos elsewhere.

Later, I ask a friend if he knows when Cabbage’s debut album is coming out and he tells me they have absolutely no plans yet. We agree that both need this record in our lives, how the world needs their record and how it has to be out right now – if not sooner. And I think to myself; When will this damn vegetable shortage ever end?