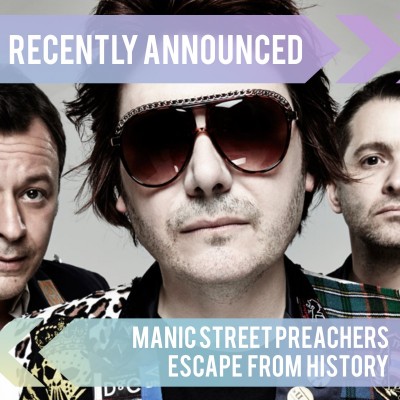 Manic Street Preachers have just released a trailer teaser for Sky Arts Rocks documentary Escape From History. It documents the time that the band evolved from their bleak masterpiece The Holy Bible towards the release of Everything Must Go, the anthem laden album which broke them into the mainstream. It starts with their 1994 tour which was fraught with problems, particularly the fragile mental health of lyricist and rhythm guitarist Richey Edwards, which culminated with a destructive release of tension causing £26,000 of damage to sound and lighting equipment. Cathartic though that moment was, Edwards problems continued to exacerbate and in the leadup to continued promotional touring in America he made the choice to simply disappear leaving little clue as to his whereabouts with no confirmed subsequent sighting.

In the wake of his decision bandmates drummer Sean Moore, singer and lead guitarist James Dean Bradfield and bassist and lyrical partner Nicky Wire were left with the huge emotional weight in dealing with the disappearance of their childhood friend. Escape From History charts a time when Manic Street Preachers were not even sure they should continue as a band and the creation of the record Everything Must Go which would become their greatest commercial triumph at that stage.

Escape From History has been created by BAFTA Award winning director and previous Manics collaborator Kieran Evans. The Welsh filmmaker has worked with the remaining trio on the single promotional videos for past two albums Rewind The Film and Futurology in addition to previous documentaries Culture, Alienation, Boredom And Despair examining the band’s album debut Generation Terrorists and Freed From Memories which also examines Everything Must Go, plus concert movie Be Pure, Be Vigilant Behave which captured the energy of the 20th anniversary live performances of The Holy Bible.

The announcement of Escape From History comes in the lead up to the release of their thirteenth as yet untitled studio album. Expected to take its cues from their previous anthem laden stadium rock albums, little is known other than a song described by Wire as exploring the relationship between Caitlin and Dylan Thomas which we imagine may take a similar lyrical style which duets between male and female singers in a similar style to previous songs Little Baby Nothing, Black Holes For The Young or Divine Youth. Documentary creator Evans describes the upcoming record as “very, very melodious.”

“I only (heard) them on acoustic guitar but there was a lot of melody,” Evans clarifies “The subject matter is the same as you’d expect from the Manics, but the songs were hooky in a good, classic way – like ‘Send Away The Tigers’, ‘Everything Must Go’, ‘This Is My Truth’. I think they’re keen to explore that, but who knows – the darkness may descend.”

The new material is thought to feature prominently when the Manics take over Times Square in Newcastle on Saturday 5th of August, 2017. They will also play their huge hit singles plus maybe a few surprise fan favourites at the open-air concert.