Trudy And The Romance // Mona 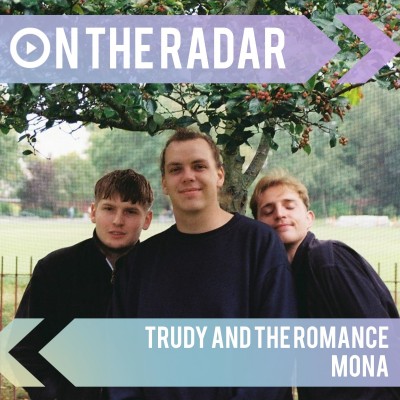 Trudy And The Romance

Liverpool has always been the source of limitless musical creativity and the cities latest offering are Brad Mullins, Lewis Rollinson and Oliver Taylor collectively known as the doo-wop revivalist three piece Trudy And The Romance.

Merging a woozy off kilter skiffle with burst of energetic garage rock and frequent freak outs, Trudy And The Romance have one foot in the past whilst confidently striding into the future. This wild head rush of styles captures the crazed feelings of love, with all the lust, romance and heartbreak that comes with it.

They have been quick to burst onto the scene, having already been touted by the likes of DIY, NME, Nylon and Fred Perry Subculture to be the big thing for 2017. This critical support has been backed by prominent airplay having been championed by the likes of Steve Lamacq who declared them his artist of the week on BBC 6 Music plus regularly enjoy being played by Beats 1, Radio X and BBC Radio 1.

Following a wonderfully rowdy 2016 which saw them support The Big Moon and appear at festival such as The Great Escape picking up more than a few fans impressed by their rabble-rousing sets along the way, they look forward to a year which sees them play a headline tour in April and further festival slots including SXSW. Having already seen the boys blow audiences away on the stage, we at Gigantic would like to see the boys hit the studio to get a debut album under their belt and cannot wait to see yet more blistering performances.

Click HERE for your Trudy And The Romance tickets.

Mona are certainly not short on ambition. The alternative indie rock from Nashville have set their ambitions high stating that they will be bigger than U2. Having excited critics on either side of the pond, they look well on their way to achieving that ambition.

The band caught the ear of Saul Galpern, creator of vital nineties label Nude Records, who was so impressed he made sure they signed to the iconic major Island Records. They capitalised on the added reach Island now afforded them and released a string of killer singles to accompany their eponymously titled debut album in 2011. This was followed two years later by second album Torches & Pitchforks released through Mercury Records.

More recently, Mona have released their heartfelt single In The Middle. Revealing great emotional depth, the song rises from a pained anecdote to become a highly charged redemptive anthem which we expect will become the centre piece of future sets.

Returning to the UK for a spring tour, this may be your last chance to catch them on an intimate stage before the boys hit the big time.