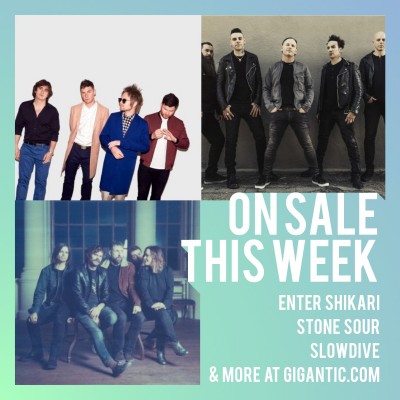 Live In The Wyldes takes place at a custom built site which is hidden away in a scenic valley in North Cornwall, situated very close to the beautiful British coastline for which the region is famed. With great emphasis placed on high end production, warm hospitality and great value for money.

Make sure you get your tickets and take advantage of the wonderful weather as this weekend features a whole host of marvellous musicians including Chase And Status, Rationale and Shy FX.

Drawing on elements of everything from post punk to hardcore and electrorock, Enter Shikari emerged right at the end of the 90’s to become one of Britain’s most innovative rock bands of recent years.

This November sees the Hertfordshire band hit the road and commence a massive arena tour which takes them to Liverpool, Cardiff, Nottingham, Newcastle, Manchester, Birmingham and London. Set your personal reminder right.

Led by the immense vocal talents of Corey Taylor, Stone Sour are the crucial metal band that have twice been nominated for an illustrious Grammy Award and have sold 2.1 million records worldwide.

With the release of their fifth album entitled ‘Hydrograd’ comes an accompanying arena tour to promote their new material. Catch them at Birmingham and Leeds in November, then Brighton, Brixton Cardiff and Glasgow during December.

Award winning metropolitan festival Tramlines takes advantage of Sheffield’s many great spaces to play host to many attendees favourite DJs, singers and bands with the parties lasting late into the night.

With the likes of The Libertines, All Saints, Primal Scream, Akala, The Coral and more all appearing across the July weekend, demand is sky high and tickets are selling fast.

Each year, Fireball - Fuelling The Fire Tour offers a fantastic line-up of absolutely unmissable punk, metal and hard rock bands. Reel Big Fish, Anti Flag and Mad Caddies have all been announced to feature as the 2017 tour tears around the country in October.

Shoegaze superstars Slowdive have delighted their many legions of fans with the release of a brand new eponymously titled album, their first in twelve years. Catch them performing at Field Day plus a handful of dates at Oxford, Manchester and London.

Set a personal reminder with Gigantic right now so you can be alerted with a text message or email when these very popular tickets become available – putting you ahead of the rest.

There are always more great events coming on sale. Check out what else is going on sale this week:

Rock The Park brings together some of the world’s best tribute and covers acts to Penylan Farm in Wrexham. A big day out that all will enjoy.

With little more than a week to go, Field Day tickets are selling out fast. Book now to see the likes of Slowdive, Aphex Twin, Death Grips in addition to many other cutting edge acts.

Penn Festival is the big weekender you need to attend. Boasting such big names as Primal Scream, Sigma, The Charlatan sand Wilkinson, you a guaranteed a good time!

Created with your little people in mind, Gloworm Festival is the family friendly festival the offers a wide range of children’s activities plus great music too.

Meltdown Festival is an annual cultural event dedicated to hosting some of the most exciting names in music from around the world. Held at Royal Festival Hall in London throughout June and hosted by M.I.A., you can look forward to seeing the likes of Giggs, Soulwax, Crystal Castles, Young Fathers and more.

Celebrating four decades of producing some of the very best British beers, you are invited to join Castle Rock Brewery's 40th Birthday Bash. A long weekend of great music plus trying out the many great brews Castle Rock produces.

And finally, we always have a huge number of essential gig tickets on offer. Other amazing events currently on sale include: