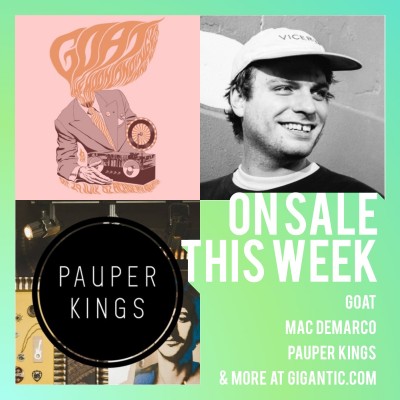 Enigmatic experimental rock collective GOAT direct their music straight to the third eye and blow your mind. More a cult than a band, the esoteric troupe emerged from thy mythic Swedish town of Korpilombolo and are led by Thomas Pynchon.

Having released their third studio album ‘Requiem’ through SubPop, the now announce a major headline gig at O2 Academy Brixton where they will be joined by The Moonlandingz and Jane Weaver plus more yet to be announced.

R&B and garage legend Craig David broke into the mainstream after featuring on the Artful Dodger track ‘Re-Rewind’. The career which ensued saw him grow into an international star selling an astonishing 14 million records across the globe.

Last year saw his welcome return with the release of his latest album ‘Following My Intuition’ which was his first to hit No. 1 since his debut album in 2000. He hits the road in June through to September to make live performances for his fans.

Taking place at O2 Academy Leicester and Attenborough Arts Centre, Handmade is one of the first festivals of the year and through expert selection often hints at the musical character of the year ahead.

This year, the fantastic festivals line-up includes two great headliners in the form of Twin Atlantic and Frightened Rabbit, plus more awesome acts such as Cabbage, Honeyblood, British Sea Power, Pulled Apart By Horses and more.

Olly Murs became a household name after appearing on The X Factor. He has subsequently sold a staggering 10 million records worldwide, revealing the unmitigated appeal the cheeky Essex chap has to fans everywhere.

Following the release of his latest chart topping album ’24 Hrs’, Murs embarks on his Summer Tour which takes him to a variety of venues he has never played before where he will perform to his adoring audiences.

Canadian singer / song writer Mac DeMarco has developed through the release of his four albums ‘Rock And Roll Night Club’, ‘2’, ‘Salad Days’ and ‘Another One’ marking him as a modern great of indie folk. See him take over iconic Nottingham venue Rock City in November.

York based blues rock band Pauper Kings have been building their loyal following and look set to breakthrough into the mainstream having played relentlessly here, across the rest of Europe and over in USA where they are a hit in Nashville. See them when they hit the road in June

Set your personal reminders for both these incredible acts right now. Other gigs going on sale this week are:

Leicestershire festival 110 Above has a stellar line-up of cutting edge artists like Black Honey, Sundara Karma and Coasts.

Rock And Bike Festival 2017 brings together a weekend of great music with tattoo competitions plus a chance to see classic and custom bikes.

Enjoy an incredible array of acts at Wilderness 2017 including Two Door Cinema Club, Grace Jones and Bonobo at the beautiful grounds of Cornbury Park.

Superstars Little Mix have enjoyed major success with their latest album ‘Glory Days’. The record received rave reviews and produced the stunning song ‘Shout Out To My Ex’ which took home the 2017 BRIT Award for Best Single. They are touring from June until September and we only have a few tickets left.

Dare you take on The Beast? Take on the challenge of the world’s largest inflatable obstacle course found at Betteshanger. Enjoy 272m of walls, balls and rings as you bounce your way all the way through to the finishing line. Sign up as a team or take on the course on your own and see if you can beat the course record.

And finally, Gigantic always brings you the very best tickets for all the essential events. Definitely check out: