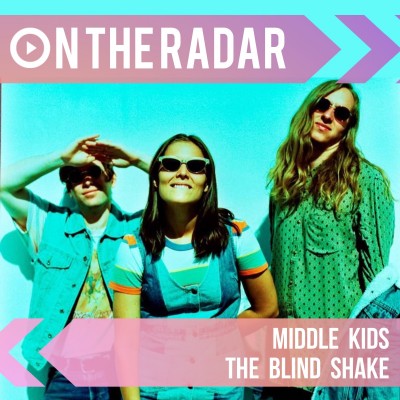 Tying together the feel of a lo-fi garage bands with the irrepressible confidence of stadium rock plus a touch of country with a bit of dream pop along the way for good measure, Australian indie pop three-piece Middle Kids are set for world domination. Armed with irresistible hooks backed by a sweet charm, drummer Harry Day, multi-instrumentalist Tim Fitz and guitarist / singer Hannah Joy look set to become your new favourite band.

The Sydney trio have been eager to make an impression and released their first single ‘Edge Of Town’ even before playing their first gig. The debut single taps into the sound that developed out of riot grrl in the mid to late nineties, with catchy riffs bolstered with a big chorus which allows Joy to show off her impressive vocal range which stretches from a close and personal drawl to dizzying peaks of high emotion.

The reaction to Middle Kids was immediate with essential radio station Triple J putting the track on high rotation spreading their name to the US where they became college radio favourites. The prominent airplay saw the song accumulate a further 3 million streams on Spotify and marked them as the ones to watch – even Elton John declaring himself a fan.

They released their eponymously titled debut EP featuring ‘Edge Of Town’ at the beginning of the year through ultra cool label Domino Records and have now set their sights on the UK. See them play at Sebright Arms in London on Monday 15th of May.

Sometimes you want a band that is just primal, to the point and totally messed up. Experimental punk band The Blind Shake was formed by Minneapolis brothers Jim and Mike Blaha after recruiting drummer Dave Roper who, between the three of them, create a wail of surf guitar carnage and sonic subversion with lashings of distortion and insurmountable waves of reverb.

Having sold their souls to rock and roll as teens, the Blaha brothers relentlessly gigged their way through college before adopting a similar stripped down approach which saw them forgo bass to explore the mid-range with dual guitars instead. Rather than being restricted by the limited range of instruments, they found they were now free to pursue a wider palette of sound that extends from whacked out loops of delay to the deep and dirty.

Check out their white hot garage rock when The Blind Shake come to town, playing at Gullivers in Manchester plus London Oslo.