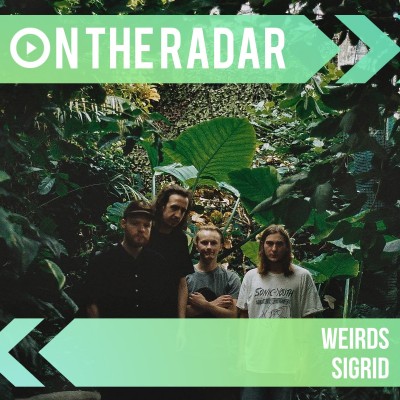 The Leeds lads formed the band in 2013 after playing in various bands together since the age of 15 when they discovered a strong bond through their shared taste of music totally at odds with their school mates. Having grown together with all the many intertwined adolescent experiences as part of coming of age, Weirds exhibit an innate telepathy when playing live which also shows in their incredible song writing ability.

Having previously released the single ‘Crocodile/Yolk’ with Denizen Recordings which was produced by MJ of Hookworms and ‘Off The Hook/Heavy Rain’ through Too Pure Singles Club they have built quite the underground following with their name often cropping up as people chat at gigs in between bands about who they’ve been listening to.

They have recently brought out new single 'Valley Of Vision' through Alcopop! Records. The song splits between a hard and thunderous rumble before fits and bursts of fast paced post punk with intermittent of ambient breaks giving the listener room to breathe and adding greater emphasise to the powerful surge of rhythm to come.

Speaking of the new single, Razall explains; “The song is about family, violence and religion, and the way these all seep into each other, so the lines become blurred. We wanted to it to be the flag-bearer at the front of the fucked up procession that is our album. The song is our crest of intent, us taking aim and limbering up – we’ve got you in our sights.”

'Valley Of Vision' is released in promotion of their debut album expected in May of this year. Catch Weirds when they play The Cookie in Leicester on Tuesday 6th of June, 2017.

Norwegian songwriter Sigrid (Solbakk Raabe) is the latest name to emerge from the fertile Bergen music scene having developed and honed her talents with various projects before making the decision to go solo.

The young singer (20 years old) has an enigmatic singing style which ranges from gentle, emotive and tender to a huge and powerful expressive swell to match her big personality. This devastating combination of talent and charisma has culminated in her recent signing to major label Island Records and looks set to be the biggest breakthrough act of 2017.

Her debut single release is the powerful anthem ‘Don’t Kill My Vibe’ which is brimming with independent spirit. The song sees the Scandi-pop star make a rousing declaration of defiance and was co-created with producer Martin Sjølie.

“When we wrote ‘Don’t Kill My Vibe’, Martin asked me what I’d been thinking about, and I started talking about this difficult previous session I’d been in. I could’ve described this upcoming moment (of truth) as a bad teenage novel but ok, short version: I almost killed that Mac keyboard due to angry writing.”

The songs gentle intro belies the huge sound that follows. In spite of the controlling behaviour Raabe assigns to the unknown antagonist throughout the verses, she is able to overcome and with a crash of drums and the onset of deep synth making a gleeful resolution to refuse to be bound. Her cry explodes with confident glee rather than anger proving that a smile can often reveal far more strength than rage and shouting.

Having already announced a show at Hoxton Bar & Kitchen on May 17th, she returns to the capital to play Scala London on 13th of September, 2017.