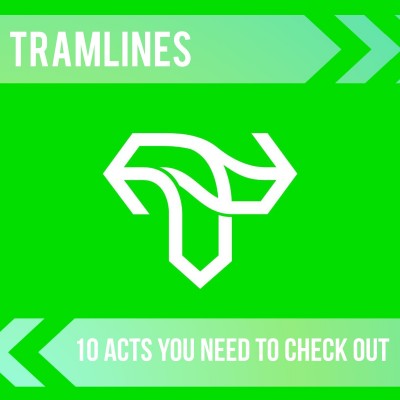 There is no bigger musical event in Sheffield than Tramlines. The three-day party plays host to some major names with Dizzee Rascal, Reverend And The Makers, Basement Jaxx and Katy B having all made appearances on their stages on previous occasions.

This year metropolitan festival embraces a wide spectrum of styles and boasts a huge array of awesome headliners including Albion tearaways The Libertines, psychedelic superstars Primal Scream plus the wonderful electronica of Metronomy.

Now the organisers have made the final announcement of their complete line-up, we take a look at the Top 10 names that you definitely need to check out.

Loyle Carner is the future sound of UK hip hop. Where others may hide behind fake gangster personas, Carner’s strength lies in his unwavering honesty and delves deep into his hard emotional experiences and turns them into flawless flow.

The start of the year saw the release of the rising South London star’s debut album Yesterday’s Gone. The record draws influences from soul and blues yet sounds unmistakably British, exhibiting all the potential to become a true great.

The Manc band have yet to release a debut album but have already made a name for themselves with singles like Kevin, Dinner Lady and Uber Capitalist Death Trade plus crazed live performances making for unmissable chaotic gigs.

Effortlessly cool Brighton band The Magic Gang have been touted as the ones to watch by the likes of NME, Drowned In Sound and Huw Stephens who championed them on his BBC Radio 1 show through constant prominent airplay.

Their bright and breezy songs see them tap into indie pop with a good measure of scuzzy rock and roll making them essential viewing for a hot summer festival.

Fiercely intelligent, Akala’s impeccable lyrical skill continues to develop and builds upon the profound talent exhibited on his debut album It’s Not A Rumour which saw him take home a MOBO Award for Best Hip Hop artist in 2006.

Combing a live band with razor sharp rap, his music takes an unflinching look at social ills and inequality and raises awareness whenever he brings the beat.

Spring King have been quick to expand their ever growing fanbase by fusing fiery garage pop with scorching art rock. Formally the solo project of Tarek Musa, Spring King evolved into a band after he enlisted his school friends.

The Manchester lads released their debut album Tell Me If You Like To last year which had the music press absolutely enthralled.

Taking their name from the Welsh word for ‘aliens’, Estrons formed after a chance meeting on a beach and continue to impress with each blistering new single.

The trio power through every song at breakneck speed with satisfyingly huge slabs of distortion, taking down gender norms and challenging misogyny head on through their highly intelligent lyrics.


Inventive and resourceful , the remarkable music of Cate Le Bon sees her make playful leaps of creative joy as she explores the limits of her abundant talent.

Last year saw the release of her fourth album Crab Day which saw her create a unique post punk sonic space all of her own, continuing her fruitful experiments in sound and marking her as a modern great.

Having made their name playing countless blinding sets on the festival circuit last year, The Big Moon now release their highly-anticipated debut album Love In The 4th Dimension which is sure to top many magazine’s Album Of The Year lists.

Their energetic live performances reveal their enormous stage presence and never fail to play an amazing gig. You need to see this set!

South London gang Goat Girl epitomise grubby rock and roll glamour. Having toured with the likes of The Moonlandingz and The Lemon Twigs, their brand of trash rock is certainly turning heads.

The fiercely independent fourpiece grew out of the DIY scene by putting on their own gigs to grab the attention of Rough Trade who released their double a-side 7” single Country Sleaze / Scum just last year.

Listed by BBC Music in their Sound Of 2017, Croydon rapper Nadia Rose is set to explode. Having already built an underground following with the killer tracks Station and D.F.W.T., Rose broke through with third single BOOM which earned her prominent radio airplay.

The sassy MC draws dancehall together with hip hop to create bass heavy tunes that ooze with attitude. Guaranteed to always bring the party.