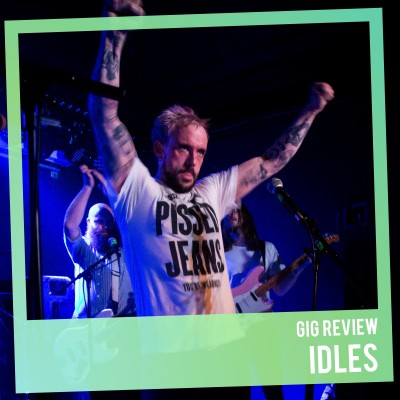 Much has been made of Bristolian post punks Idles in the lead up to their aptly titled debut album Brutalism. The brand-new record sees the band unleash unrelenting and abrasive bass heavy riffs to match crazed aggressive polemics that reference everything from the collapse of the NHS to Trevor Nelson’s favourite sport.

Their muscled debut has attracted immediate wide spread attention from the music press and enjoyed prominent airplay after every track was played on BBC 6 Music having been made their Album Of The Day, so they are met by a giddy and enthusiastic crowd at The Bodega.

All photographs are reproduced with the kind permission of Mike Wheeler. (FotoMikey Flickr)

As the band pick up their instruments and prepare their assault, singer Joe Talbot is the last the take to the stage. Leaning backwards he directs his head to the ceiling and fires a glob of spit at the roof where it sticks and remains. Pleased with his territorial display, he addresses the audience for the first time asking “Shall we start then?” The crowd roars in approval and the band launches headfirst into the music.

The audience lunges and throbs with excitement as Idles throttle through their set. Many know the words of every song with some travelled as far as their hometown of Bristol to follow them showing the level of dedication they are inspiring already, and its easy to see why.

Their songs speak directly to a lost generation laden with high expectations placed upon them yet given little options and burden with debt. The pressure that comes with the possible extinction of the NHS, zero-hour contract wage slavery and the increased tension on the streets of Brexit Britain explode into onstage ranting and a wall of sound as dense as granite, greeted by howls of delight and pogoing from the damned audience.

Each song acts like a sledgehammer, a good hard bludgeon to the side of the head, pausing only for intermittent moments cajoling of the crowd by the band and a spot of cake brought as a gift by a member of the audience. The expertly executed hard riffs fuse with the chaotic action of the overexcited attendees making for an exhilarating wild ride.

In a musical landscape typified by bands readily agreeing to corporate sponsorship, bereft of anything to say and happy to make easy digestible music to not scare off any potential demographic group resulting in yet another bland band, then Idles are the antithesis. Their no holds barred approach to sound and words is exactly what we need right now.

Tickets for Idles are currently available.

All photographs are reproduced with the kind permission of Mike Wheeler. Further examples of his photo work can be found documenting Little Wolf Parade LiveArt Events. (https://www.facebook.com/littlewolfparade/)