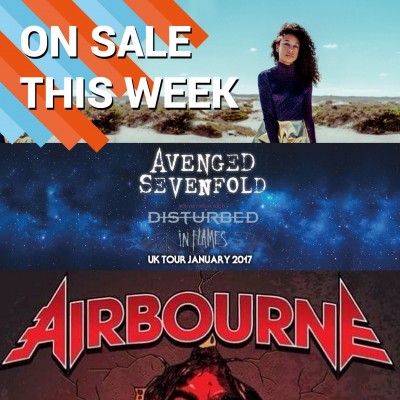 The Californian hard rockers are joined by the legendry Disturbed and Swedish death metal band In Flames in January of 2017. With such an amazing trio of ferocious acts, the bar is set very high for all gigs throughout the rest of the year.

There are few more truly inspirational bands than The Who. The original sixties band shaped the sound of rock and roll, defining the musical landscape with their constant innovation and have come to be recognised as amongst the most important cotemporary musicians.

Having recently returned to the Isle Of Wight where they stole the show at both the 1969 and 1970 festivals, The Who have recently turned their attention to an acoustic reworking of their rock opera album Tommy. Touring in April, their upcoming shows will be a masterclass in how to rock.

Curated especially with children in mind, Gloworm is a two-day event which promises the adventure of a lifetime with incredible activities, rides and workshops all included. All who attend can expect guest appearnces from Dick & Dom, Mr Bloom and more.

The family festival takes place at the beautiful Clumber Park near Worksop and offers everything your little people could wish for. Plus, fantastic live music performances from Toploader and more.

Black Stone Cherry are an exciting mix of southern style rock with heavy grunge overtones. Having just released their sixth studio album Kentucky, they are ready to return to the UK to promote the new release with further incredible live shows.

Tickets are expected to fly off the shelves, but you can set your own personal reminder via text or email with Gigantic so you are ready for their release.

Neo soul singer Corinne Bailey Rae has become a household name in both the UK and the USA since the release of her eponymously titled debut album in 2006. The album sold 1.9 million copies in North America alone and saw her nominated at the Grammys for Record Of The Year, Best New Artist and Song Of The Year. Her new release The Heart Speaks In Whispers is already a commercial success and forms the basis of her upcoming Autumn tour.

Stunning indie folk band The Lumineers have amassed a huge following with their enthralling live performances and Platinum selling self-titled debut album. Their new album Cleopatra has already shot to #1 in the UK and USA and will feature in their upcoming live performances.

Alternative audiences will be electrified to know that shoegaze stars TOY have just announced a tour for their upcoming third LP Clear Shot. The Temper Trap will also be promoting their brand new album Thick As Thieves with live performances. Having just signed to Julian Casablancas’ label Cult Records, INHEAVEN are ready to take on the world and be sure to see why Blossoms have been getting critics so excited.

Also, North London producers Gorgon City get ready to show off material from their new House record Kingdom: Part 1 and synthpop duo AlunaGeorge promote new record I Remember with a date at KOKO in London.

Situated in the beautiful countryside location of Cornbury Park in Oxfordshire, Wilderness has everything you could want from a festival. Exciting theatre and art productions, gourmet food stalls, compelling public speakers and great music.

Acts scheduled to play are Robert Plant & The Sensational Space Shifters, The Flaming Lips, Crystal Fighters plus many more.

Tramlines once again thrilled their lucky attendees who were treated to a plethora of world class acts including Dizzee Rascal, Catfish & The Bottlemen, The Dandy Warhols, Kelis and Gaz Coombes.

The award winning festival currently has extremely limited amounts of Super Early Bird tickets on sale. So book now before they are gone!

You can see all these great bands and more this October at Brooklyn Bowl in London.

Block party DJ and turntablist pioneer Jazzy Jeff will be leading the party with live dates this Autumn. The Grammy Award winning producer had already made his name on the streets of Philadelphia before teaming up with Fresh Prince Will Smith to dominate the worlds speakers and TV screens.

Three massive names in rock; Memphis May Fire, Silverstein and The Devil Wears Prada team up to make a formidable line-up. The three heavy bands begin their tour together in November. Metal fans will also be excited to know Norwegian band Kvelertak will also be returning to the UK in December.

We have tickets for two astounding band heroes returning as solo artists including Gomez singer Ben Ottewell and Pete Hooton, front of influential indie group The Farm. Be sure to check out Evan Weiss AKA Into it. Over it. whose tender indie rock tunes make for powerful live performances.