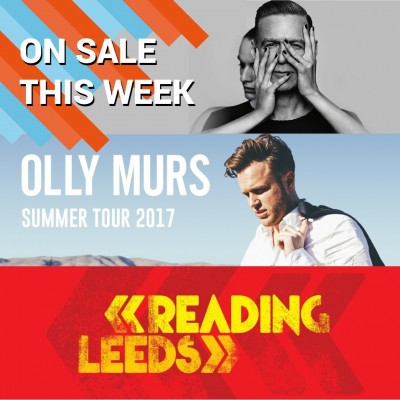 Essex singer Olly Murs shot to fame as a contestant on The X Factor. Whilst competing, the cheeky chappy became a household name after nearly winning the sixth series. He has since sold a staggering 10 million records worldwide.

Following the release of his incredible new album 24Hrs, Murs has announced an extensive Summer 2017 tour which will be perfect for all the hot evenings to come. Tickets go on sale at 09:00 tomorrow so get ready because they will sell – fast!!

Tell me; Are you ready to rock? Because ultimate glam metal band Kiss are hitting the biggest stages the UK has to offer during May 2017. The ultimate hard rockers have a huge arsenal of hits including Crazy Crazy Nights, I Was Made For Lovin’ You and Rock And Roll All Nite.

Kiss were inducted into the Rock And Roll Hall Of Fame after selling 100 million records worldwide and writing the book on crazy excess and rocking out. Do not miss!

Sounds of the City

The city of Manchester certainly knows how to throw a party and everyone is getting excited about the three astounding Sounds of the City events taking place at Castlefield Bowl during July 2017.

The three open air concerts feature such ubiquitous indie icons as Richard Ashcroft, The Levellers and The Waterboys plus local heroes James who will all be playing their greatest hits plus more at these sensational summer shows.

Click HERE for your Sounds of the City tickets.

Although not all the artists performing have yet been announced, the annual celebration of everything folk always offers an extraordinary array of amazing performing acts, displays of dance and interesting workshops to get involved with. So book your ticket today!

All rock fans know that Leeds and Reading Festivals offer the very best weekend of intense rock mayhem. The two sites swap their line up to share an intense experience that boasts performances that have become stuff of legend.

The first headliner to be announced are the huge stadium space rockers Muse known for giving an out-of-this-world performance every time they take to the stage. Other acts confirmed so far include At The Drive In, Major Lazer and Bastille with many more bands yet to be announced.

Bryan Adams can proudly boast of being one of the most highly decorated songwriters in rock. He has received 20 Juno awards and a further 56 nominations, three Ivor Novello Awards 15 Grammy Award nominations plus nominated for three Academy Awards for his music work in films – including THAT song! Tickets go on sale tomorrow.

No-one has quite the musical flair and dashing charm as the king of the wild frontier; Adam Ant. From his early punk days to becoming Prince Charming and beyond, the new romantic poster boy exploded in the 80’s and remains as enigmatic as ever. His highly anticipated May 2017 tour takes him to a stage near you so get ready for Ant music by booking your tickets this week.

Dark, brooding and wildly exciting; The Mission are the definitive gothic rock band. They found fame all over the globe after they quickly established themselves as one of the most exciting live bands of all time and have sold over 4 million records. With the release of new album Another Fall From Grace, they have announced a tour to go on sale tomorrow.

East London’s Lovebox festival has a well earned reputation for offering a staggering line up of cutting edge artists. It was originally started with the intention of spreading new and exciting music across the capital city.

Now approaching its fifteenth year, the festival has become a main attraction and this year stars singer and rapper Frank Ocean.

Each year Field Day draws a huge crowd of switched on festival goers, each attracted to a vast range of awesome alternative acts and cult bands offered. For many, Field Day is THE music event of the year.

This year sees the return of electronica god Aphex Twin to the live stage. Many more acts will be announced closer to the start date.

The Human League are quickly selling out of tickets for their ‘A Very British Synthesizer Group Tour’ which brings 2016 to a close in a spectacular fashion. Join them this December when the Sheffield synth superstars play their hits and more.

Grammy nominated songwriter Beth Hart has also been celebrated by being nominated twice for the ‘Contemporary Blues Female Artist of the Year' category at the Blues Music Award. The celebrated Californian singer takes over the Royal Albert Hall for one night in May 2017.

And finally, it goes without saying that Gigantic always has the best tickets for your favourite events so you need to stick with us. Other events currently on sale are: The Rifles / Blonde Redhead / COUNTERFEIT / Ladyhawke / Isaiah Rashad / Davido / Jesca Hoop / Man & The Echo / Narcos