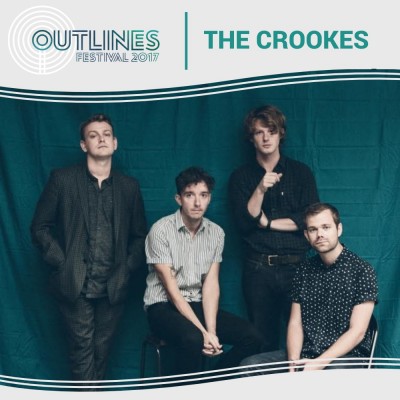 Indie rock band The Crookes are effortlessly cool whenever they take to the stage to perform. Their heartbroken melodies and forlorn lyrics have won over quite a few celebrity listeners prompting Jon McClure of Reverend And The Makers to herald them as “Sheffield’s next set of musical geniuses”.

The band are firmly enmeshed into the rich musical fabric of the South Yorkshire steel city and continue the tradition of kitchen sink realism for which their town is famed and demonstrate their devotion by naming themselves after the Crookes suburb where the founding members met.

Given their reputation for incredible live sets and obvious civic pride they make the perfect choice for Outlines Festival which takes place in their hometown on Friday 3rd and Saturday 4th of March, 2017. The city festival is spread across a handful of premier gig venues, including Queens Social Club, Bloc Projects, The Leadmill, The Harley and Plug.

We spoke to the band’s singer George Waite about the local music scene, starting their own label and their upcoming participation in Outlines Festival.

Sheffield enjoys a rich musical legacy that has produced essential acts that span from electronica to Britpop, rockabilly, post hardcore and beyond. Who are amongst your favourite acts produced by your hometown?

For a new band, you couldn't ask for a better city to develop in. It's got an amazing musical heritage but it's small and very community-based so there's no rivalry or any of that. My favourites include: Slow Club, Richard Hawley, Hey Sholay, High Hazels, Pulp, Standard Fare, The Buffalo Skinners, Hot Soles... And probably a load more I can't think of just now.

The city plays host to a huge array of vibrant music venues that are vital to up and coming fresh talent, some of which are taking part in the magnificent music festival Outlines. Which of the local stages do you enjoy playing and where do you like to hang out?

We love playing The Leadmill, I see that as the spiritual home of Sheffield music. I have fond memories of The Harley starting out - they've always been great to us and it's the venue we've played more than any other I think. Picture House Social is our local - the soul club they run is one of our favourite club nights here. Bungalows and Bears puts on some really good shows too - we've seen Amber Arcades and Gengahr there recently and it's always good vibes in there. Sheffield is spoiled for great pubs too - Fagan's, Shakeapeare, Brown Bear, Fat Cat, Bath Hotel are all haunts of ours.

The Crookes have undergone significant changes in your line up since starting in 2008. How do you think this has effected the sound and feel of the band?

Yeah we don't like to do things the easy way... I do think we are a better band for having changed line ups like we have. It keeps us all on our toes and the fire lit which is priceless when you've been together for as long as we have.

You have been championed by Steve Lamacq and enjoyed prominent airplay on BBC Radio 1 and 6 Music plus received kind words from a few local legends along the way. How did you grab the attention of the likes of Lammo, Jon McClure and Richard Hawley?

We have to thank our manager Penny for a lot, if not all, of that. She has been around the Sheffield music scene for a while and she knew all those people from her time in bands and being a promoter so I think she basically strong armed them into coming to watch us one night. I remember it was at the stockroom in Sheffield which isn't there anymore and we were still really rookies. We were halfway through our first song and Steve Lamacq and the Rev walked in and stood right in front of us. I forgot all the words immediately and just made sounds until I got back on track. I thought it was a disaster but it turned out alright in the end. And it's been the support of people like Steve, John, Richard Hawley that gave us the confidence to really give it a go so we owe them a lot.

We are looking forward to your upcoming December tour which ends a year that many found quite turbulent. How has 2016 treated you?

It's been a crazy year. We were on tour this time last year when the Paris attacks happened and it feels like it's just been a relentless shit show since then. We've been away a lot this year so we've had enough distractions to keep us sane thankfully but we're all looking forward to some fun in December and a happy - fingers crossed - new year.

Your amazing album Lucky Ones was released right at the beginning of the year. Have the songs changed much from the recorded versions now you’ve had a chance to play them live?

Not consciously but songs always take slightly different forms when you play them live. We don't have enough hands to recreate the songs exactly but there's more energy and confidence which comes from having played a song 100 times.

The record has been released through your very own label Anywhere Records. Why did you make the decision to publish it yourself and what have been your experiences of that?

We got to the point where - as good as Fierce Panda were to us, and we owe them alot - we felt like we wanted more control. Nobody cares about a band as much as the people in that band so who better to be in charge of every last detail? Tom and our manager Penny are doing a great job as day to day heads of the label and I think it will only get stronger from here. There's something really exciting about knowing we could release a prog EP tomorrow and no one could argue with that. We won't, obviously, but it's nice to know.

You seem to write at a furious pace having already produced four albums, a dozen singles and an EP in your short career. How do you balance the needs of touring with the time it takes to write and record?

We don't really let the two things overlap. If we're on tour we are completely committed to that - playing shows, making the set as good as it can be, having fun and making the most of travelling because that's the reward in many ways for all those months of being locked away writing. When that's over, you need time to come down and then you start the cycle again. Richard Hawley told us when we first met him to never stop writing because you never know when you'll need a new song. When he talks, you listen. It took us about three months to write Lucky Ones so we're aiming for that again. Fingers crossed anyway.

We loved the intimate song Ex-Lovers which features South London singer Misty Miller (B-side to I Wanna Waste My Time On You). The song feels like a snapshot into a private moment. How did you get her on board and how was the song recorded?

Early last year we were toying with the idea of doing a song with a boy/girl vocal which we'd never done before. We had the song - a reworked demo from our third album - but no one to sing on it. By chance Misty was due to play at the riverside in Sheffield around that kind of time and we went, asked if she'd be interested and it all went from there. With the production, we had tried loads of different ideas - full band, organs, droney guitars - but none of it was clicking so we decided to do it as simply as we could, say on the floor with one microphone in between us. It was pretty intense but a real honour to sing with Misty - she's massively talented.

We are really looking forward to Outlines 2017. How did you become involved in the fantastic festival?

Us too! It's our first time playing Outlines and we are delighted to have been asked. Sheffield's got such a good atmosphere about it when it comes to big, live music events so I'm really looking forward to it.

Which other amazing acts are you looking forward to seeing play Outlines 2017?

So far Slow Club and The Orielles are on my must see list but I'm excited about getting out and discovering stuff I've not heard before too.