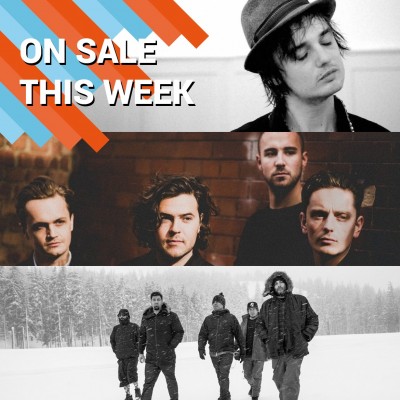 After headlining at The SSE Arena, Wembley in London and playing a truly stunning set at Download Festival in support of the latest album Gore, Deftones return to the UK for two truly exciting upcoming dates in the new year.

Since their inception in the late 80’s, Deftones have consistently stayed at the forefront of experimental hard rock by embracing influences ranging from hip hop to psychedelic space rock. Through their unique sound they have amassed a huge worldwide following.

Get ready to sail the good ship Albion because Doherty is back in town. Poet, painter plus and rock antihero; Peter Doherty needs little introduction as the man who found fame through The Libertines who also became the infamous instigator behind Babyshambles and has enjoyed success as a solo artist in his own right.

He has just announced not-to-be-missed dates in London and Manchester to coincide with the release of his upcoming album Hamburg Demonstrations.

A sister event to the award winning Tramlines, the genre-defying event offers some of the biggest names around combined with the best up and coming bands, DJs, singers and more. Outlines has already announced their initial line up which includes the likes of Jagwar Ma, The Wytches and The Selector with even more yet to be announced!

For a closer look at some of the amazing acts playing, take a look at our BLOG.

Amazing alternative rock band Amber Run have just announced their new headline dates for February, 2017. The extensive tour takes them all around the UK so make sure you see them when they hit a stage near you!

The Nottingham based band has steadily been building a grassroots fan base through their electrifying live shows. Their break came with the release of their Top 40 debut album 5am which has seen the band reach even wider audiences.

London band Bear’s Den have been purveyors of fine folk rock since their inception in 2012. Newly become a two piece, Andrew Davie and Kevin Jones have recently received two nominations at the illustrious UK Americana Awards for both Artist and Song of the Year. They announce dates for 2017.

Canadian indie pop twins Tegan & Sara continue to grow into international stardom. Not only are they multiple winners at the important Juno Awards they have found massive commercial success as they continue to grow. Get your tickets for their February tour.

Sundara Karma are the latest band to go beyond the norm and chase something truly sensational. Wild, fresh and exciting, the band boldly challenge a status quo of characterless bands and pointless pop. Their tickets go on sale this Friday.

We have some great indie outfits about to come on sale including math rockers Dutch Uncles, emo revivalists The Hotelier and shimmering musician C Duncan. Plus, if you like your sound with a bit of folk inflection Skinny Lister will be going on tour as will be Stornoway and Keane singer Tom Chaplin makes his comeback with a date to promote new album The Wave.

Other events to get excited about which go on sale this week include; Brad Mehldau / Wilkinson / Lemaitre / Thought Forms

With the festive period fast approaching, why not spend a fun day out ice skating? Trentham Ice is a great day out for all the family and runs from 9th of December until 8th of January.

The real ice rink is idyllically located next to the River Trent and can be found towards the rear of the Trentham Garden Centre. Housed on the comfort of the marquee, skaters will be protected from the elements allowing them to enjoy their experience no matter the weather.

Treat the whole family to a wonderful spectacle beyond your imagination when Disney On Ice presents Frozen. The Academy Award® winning enchanted tale has been re-imagined as an impeccably choreographed dancing event on ice. The high quality production will whisk you away to the snowy fantasy land of Arendelle where you will meet the loving sisters Anna and Elsa plus he hilarious snowman Olaf, Kristoff and Sven.

Expect to see other of your favourite Disney characters such as Mickey and Minnie and more at what promises to be a truly special event.

Click HERE for your Disney On Ice presents Frozen tickets.

Anarchic Californian punks Green Day bring their incendiary Revolution Radio Tour to London where they take over Hyde Park on Saturday 1st of July. Their full support acts have yet to be announced but the day will no doubt prove to be on of high energy as the trio play a scorching set that includes both their new tunes and classic hits.

Blurring the lines between fiction and reality, your favourite crack addicted DJ Super Hans will be hitting the decks this November. As portrayed by Matt King in smash hit Channel 4 comedy Peepshow, much loved character Super Hans will be bringing you all the massive tunz you need for a totally banging night.

Dream pop sensations Night Flowers have exploded in the hearts of music critics and in the imaginations of the audiences having been drawn to their heart-warming upbeat songs of postmodern nostalgia. Following their tour of Japan and with the recent release of their euphoric anthem Glow In The Dark through Dirty Bingo Records, the dream team have announced an unmissable evening at Sebright Arms. Get your tickets today!

We’ve got a great selection of events for anyone who enjoys their guitars brash and heavy. Get yourself to the UK Tech-Fest in London for five days of incredible metal bands from all over the world. Canadian skate punks Sum 41 are touring new album 13 Voices, Alter Bridge have announced a tour as have A Day To Remember, 3 Doors Down and SL▲VES. Also we have homegrown talent in the form of The Twang.

And finally, other superb events you will definitely want to attend are; GALLANT / Andy Shauf / Arrows Of Love / Bolton Soul Weekender