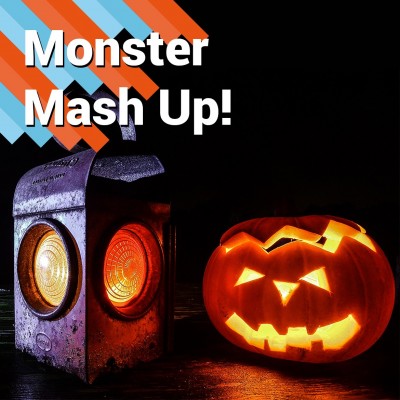 It is almost the Halloween weekend and everyone likes to get dressed up and have a monster party. But many poor souls have a frightful time trying to summon the courage to create a playlist, only to be scared off entirely.

Don’t be a pumpkin and give our selection of 13 spooky songs a listen to give you some ideas ensuring your party doesn’t become a graveyard and you enjoy the very best spooktacular weekend!

First up we have a brand new suitable leather clad vampy video from the masters of space rock; Muse covering The Cramps b-side New Kind Of Kick. Just released today, the Devonshire trio truly get into the Halloween spirit by giving it some moves even the Munsters would be proud of.

The Horrors - Jack The Ripper

Up next we have another cover of another classic Halloween party band, The Horrors take on Screaming Lord Such’s Jack The Ripper. The song is the opening track from their debut album Strange House, back from when they were a ferocious garage punk band before they went all cool and electronic shoegaze. Strange House was recently re-released on heavy weight vinyl and if you did only have one album for your Halloween party, then this should probably be it!

Ultra cool New York art rockers third album It’s Blitz saw the trio expand to include synths in addition to Nick Zinner’s audacious guitaring, Brian Chase’s brilliant drumming and the irrepressible vocal and stage presence of Karen O. Not only did the record feature the triumphant yet melancholic single Skeletons, it also produced the huge hit Heads Will Roll. The video of the latter is more than just a nod and a wink to a certain crotch grabbing Jackson…

Taken from their aptly titled album Get Behind Me Satan, Little Ghost is a quick little ditty from blues rock pairing The White Stripes. The often over looked album track is a perfect example of the subtle genius that Jack and Meg could conjure with a stripped-down setup of just drums and a ukulele.

Film buffs will know the truly creepy track was used for the superb post-apocalyptic horror film 28 Days Later which played upon modern fears of societal breakdown, new technologies effects on nature and our bodies plus the instinctive fear of being hunted to re-imagine zombies as a rage infected relentless chase which is far more nightmarish than the comical B-movie stumbling shuffler from the past.

As mentioned before, horror punks The Cramps probably are THE ultimate Halloween band. With the creepy treble guitar intro and the biggest bass line ever invented; Human Fly will get everyone dancing. Taken from their debt EP entitled (of course) Gravest Hits, the song set the tone for all their chilling tunes to come.

The biggest TV event of the year has to be Netflix homage to eighties VHS horror flicks; Stranger Things. Ticking off every trope of the time such as a gang of plucky kids, a past-his-prime cop with a painful past, conspiratorial corporation up to no good plus a badass monster with a taste for bespectacled girls called Barbara.

The series boasted an impressive soundtrack which included the likes of The Clash, Joy Division, Foreigner and Corey Hart. But the real standout track was the series theme tune, as written by Texan analogue synth band Survive. Brooding and atmospheric, it made the perfect intro to each episode and will go down a trick or treat over your Halloween weekend.

Despite being a rallying cry against the urban decay that came in the wake of unemployment and deindustrialisation of Britain at the start of the 80’s, Ghost Town by The Specials remains a disco classic. The eerie two tone track casts its spell upon audiences drawn to the warbling organ and ska guitar.

Aspiring actor Bobby ‘Boris’ Pickett was living a dual life at the start of the sixties. Whilst looking for work at auditions during the day he would be hitting the clubs at night with the band Cordials to make ends meet. Drawing on his performing talents, Pickett invoked the likes of Bela Lugosi to give a ghoulish narration over the mashed potato dance craze that was sweeping the states.

Few remember any of Pickett’s films, but everyone knows and loves Monster Mash.

Hit 1991 movie The Addams Family was a remake of the classic 60’s TV series derived from the 30’s comic strip. Determined to drag it kicking and screaming into mainstream for modern audiences, the film was promoted by the pop rap track Addams Groove hip hop superstar MC Hammer.

The song was bestowed the Golden Raspberry Award for Worst Original song, which seems a bit unfair when most songs of their ilk are pretty kooky. Breathe new life into the song and resurrect it this weekend.

When Ray Parker Jr. was faced with the deadline to produce the theme song for the motion picture Ghostbusters he almost drew a blank finding that the song had a title which was impossible to fit with anything. As luck would have it, a cheap late night TV commercial gave him the hook he badly needed at the last minute.

Now everyone knows exactly Who Ya Gonna Call!

Despite Simon Pegg’s declaration in Channel 4 hit comedy series Spaced that it is “boil-in-the-bag perversion for sexually repressed accountants and first-year drama students with too many posters of Betty Blue, The Blues Brothers, Big Blue and Blue Velvet on their blue bloody walls”, Time Warp remains as a staple for any spooky social event.

How can you possible enjoy Halloween without hearing Thriller? The song was released in 1982 when Prince Of Pop Michael Jackson was in his prime. The essential spooky song was accompanied by a $500,000 video shot by Hollywood director John Landis which was more like a movie which sees MJ turn into a Teen Wolf (despite being 24 at the time) before getting groovy as a zombie.