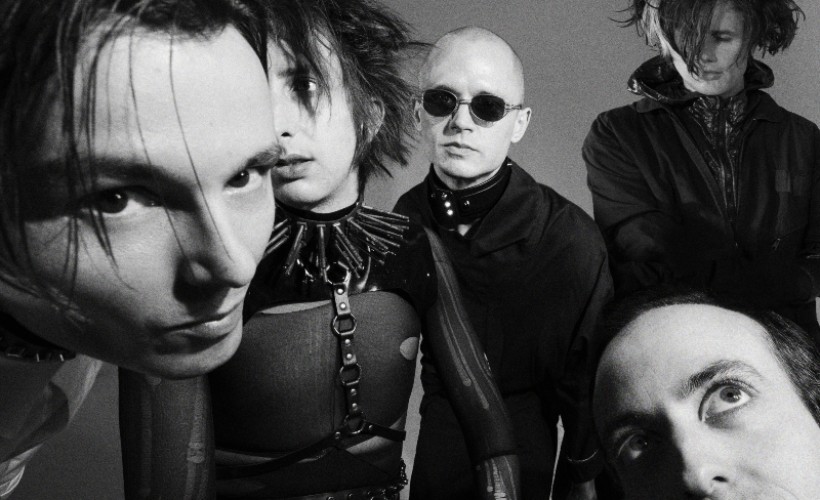 From the early days as goth punk band from Southend-On-Sea to being instrumental behind the shoegaze revival, The Horrors have grown from being NME party darlings to a monolithic arena filling creative force. Taking on aspects of stadium rock, psychedelia, kraut and electronica, they are now one of the most exciting and daring bands in contemporary British rock.

Fans have been excited by recent release of brand new single Machine which comes from their forthcoming fifth studio album. They will be promoting their new material with a headline show at Cambridge Junction on Thursday 26th of October.

Everyone is after The Horrors tickets so you will need to act fast and ensure you get yours booked before they are all snatched up. All Gigantic gig ticket orders can be placed using your smartphone, tablet or computer. We highly recommend you set a personal reminder so you can be alerted with a text message or an email when they become available at 10:00 on Friday 30th of June.

The band, consisting of lead vocalist Faris Badwan, guitarist Joshua Hayward, keyboardist and synthesiser player Tom Cowan, bassist Rhys Webb and drummer and percussionist Joe Spurgeon, first emerged with a goth influences garage sound from Southend in 2005. Within a year they had released their first EP and 2007 saw the release of their debut album Strange House which hit No. 37 in the UK album charts.

Taking some time out, The Horrors re-emerged in 2009 after shedding some of the theatrics in exchange for a development of sound towards kraut and psychedelia. The result was the stunning album Primary Colours which marked a permanent change in sonic direction which also saw them attract larger audiences and by the release of third album Skying two years later they had become somewhat of an stadium band.

Their latest album release came in 2014 and is titled Luminous which continued their run of impressive records.

“The Horrors go several steps further. Fragments of the group's past link together and the future illuminates in unison. Luminous is the album they've been destined to make.” - DIT Magazine

As ever, there are only limited supplies of The Horrors concert tickets being made available so you will need to book promptly because they will go fast. Gigantic always offers excellent customer service in helping you choose from a wide range of essential gig tickets so you know we are the right place to come when booking your big night out.

Rhys Webb from the The Horrors grabbed Girls In Synthesis shouter/bassist John Linger an unopened copy of PiL's 'Metal Box'!

The Horrors are playing Dot To Dot Festival 2018.

That's all we have for The Horrors! Check out their upcoming shows