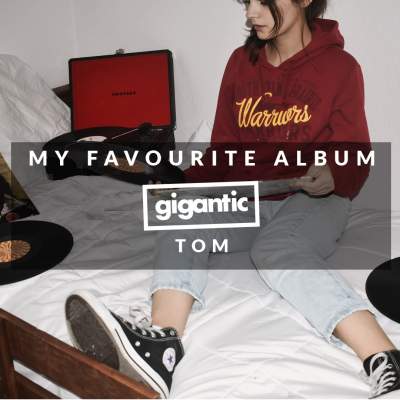 Gigantic shares their passion with fellow music lovers, and each week we present the revealing My Favourite Album blog giving a personal insight into the personal tastes of vital performers and artists. Today, we are very excited to be joined by TOM!

Former singer of mid-00‘s indie legends The Paddingtons, Tom Atkin has evolved his sound whilst shortening his moniker to the enigmatic title of TOM. Embracing the wavy vibes of the next generation, particularly the work of Little Peep and Post Malone, and fusing it with the riotous attitude of the grot n’ roll scene he helped pioneer – it’s a radically exciting return as first revealed on debut solo single “Lil Fucker”.

TOM is expected to be one of the biggest break-through names of 2021. He kicked off the exciting year with the release of second single “Honey Brain” – an impassioned gutter punk cry of pain and frustration after being dragged into fight he never wanted. Both songs will be included in his upcoming EP expected to drop later this year.

When he isn’t working on his music, TOM teams up with friend and fellow Hullensian Harry Hainstock to create the 22 Grand Pod which talks to other bands and key figures that shaped the sound of the rock n’ roll millennium. Guest appearances include Faris Badwan from The Horrors, Gary Jarman of The Cribs, the infamous Alan McGee and many more!

It’s really hard to choose this, but I think the album I have to go with is in particular important because it moulded me and my mates at the time.

Is This It – The Strokes

I actually first heard The Modern Age EP from Ali Hubbard my best mates’ sister who also later became my good mate and tour manager. At the time I was still listening to a lot of Oasis, Sex Pistols and blur and I think the whole world was waiting for a band like The Strokes.

The memories around this time were just the best. I’d just started going out to all the indie clubs in Hull. The Strokes made it cool to be in a guitar band again, which at the time was all we cared about really ya know... we just wanted to play songs had not much else going on.

...I think not only for me and the rest of my band back then (The Paddingtons) but for anyone in the world that was in to guitar bands. This album was the turning point, coming out the back end of the 90’s with all that stuff that was happening that I’m not sure anyone really knew what was..

Sonically it’s great and Julian’s vocals recorded through a guitar amp too. It’s just the coolest sounding album. Every guitar riff to every melody is ace.

It was a real game changer in music, I obsessively listened to this album every day around then. It’ll never get old. It was just start to finish brilliant. It was a brand-new sound for me in a way. The strokes with this album introduced me to bands like television and PIXIES which I think were bands that influenced this album when you listen to it.

This was just the birth of a new revolution which went on to give birth to so many other great bands after it. It moulded the whole scene of guitar bands even down to how everyone looked.

I honestly like every track. I guess if had to choose a couple fave tracks I’d go with “The Modern Age” which was the first track I ever heard.

Then... “Alone, Together” love these lyrics

He knows it's justified to kill to survive

He then in dollars makes more dead than alive

The world is over and I don't care cause

I am with you, now I've got to explain

Things they have changed in such a permanent way

Can we go back to your place?

You drink too much, makes me drink just the same

Oh, the first time it happened too fast

And second time I thought it would last