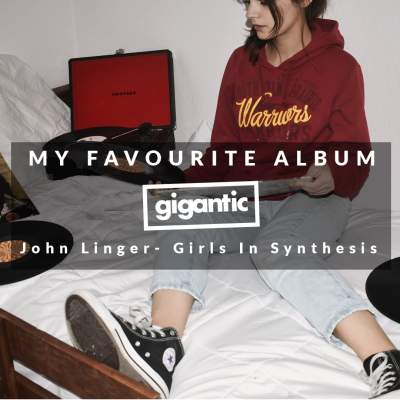 In savage times, there is nothing more satisfying than witnessing a band who can truly articulate anger and transform frustrations into passionate performance. So, we are very pleased to be joined for My Favourite Album by Girls In Synthesis shouter/bassist John Linger.

First formed in the latter months of 2016, the London based trio quickly stood out as a new force to be reckoned with owing to their frenetic gigs and the rapid fire release of blistering 7” singles which can now be heard on their ‘Pre/Post: A Collection 2016-2018’ compilation.

This summer sees of Girls In Synthesis drop their debut album 'Now Here's An Echo From Your Future'. Recorded whilst touring last summer, sessions were held at Rockit Studio in Hull and Gun Factory Studio at Homerton right as the band were at peak fighting fitness and their tireless ferocity can be heard right across the LP which addresses issues of mortality, class antagonization and the constant rise of tension caused by ever-worsening societal problems. The acerbic post punk troika will be promoting their first full length record with a tour in October.

'Now Here's An Echo From Your Future' is scheduled for release on Friday 28th of August via Harbinger Sound and will be available on limited 12” Grey Vinyl, 12” Vinyl and CD. Pre-order your copy HERE.

Not letting a little thing like a worldwide lockdown get in their way, join Girls In Synthesis for their series of Unseen Sights rarities livestreams. The next of which is taking place at 20:30 on Thursday 14/05 on their Facebook page.

When is it from?

I first heard the album at the Southend home of my friend Rhys Webb (The Horrors). He managed to buy a sealed copy of the original metal tin pressing, which is no small feat.

Might even have been after one of the Junk club nights and we probably hadn’t slept in a couple of days, so the intensity of the album would have been even more potent. I think this would have been around 2001/2002.

It is a powerful example of how music can be experimental, abrasive, unconventional and wholly original. It’s also shows that, as challenging as this music is, it’s still embraceable and has heart.

For someone like John Lydon (and it makes me sick that people now see him as a figure of ridicule, by the way) to have created such a game changing, landmark album with the Pistols to then have done the same with the first three PiL albums is a wonder to behold.

Favourite Songs On The Album

An almost impossible task, but the hallucination inducing, circular beauty of ‘Poptones’ deserves a special mention. As does the terror inducing thug-funk of ‘Chant’. But, really, there’s not a bad song on it. Very much more than the sum of its parts.