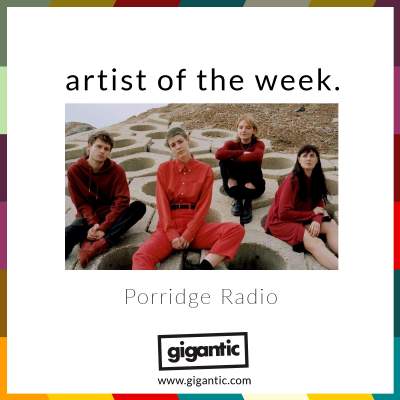 Brighton based musician Dana Margolin first began her lofi melancholic pop band Porridge Radio as a solo project, recording her absurdist takes on modern life in her very own bedroom studio. Now joined by drummer Sam Yardley, keyboardist Georgie Stott and bassist Maddie Ryall, her sound has expanded as her music has developed transforming her into a present-day underground legend.

Having recently released second LP ‘Every Bad’, we take a closer look at Porridge Radio ahead of their major upcoming shows.

There is something darkly romantic about the sea. The promise of adventure just past the horizon, yet the ever-looming threat of being swallowed by the cruel water and never seen again. Playing around the open mic nights of beach resort Brighton, Dana Margolin similarly created her own unique swirling sound which she would capture with lofi recordings at home. Dealing with issues of love and despair but with her own distinct absurdist bent, Margolin’s name became synonymous with powerful performance.

As she continued and her brooding tracks began to expand in scope, it became clear that Margolin needed to recruit willing accomplices and so formed a band – naming it Porridge Radio. Word soon spread owing to the sheer intensity of the live shows, earning them a reputation for

They teamed up to release a split EP with DIY feminist punks West America before dropping debut album ‘Rice, Pasta and Other Fillers’ in 2016. Their first album was originally released only on cassette before an extremely limited run of 300 red vinyl was pressed by independent label Memorials of Distinction to meet the rising demands of their now growing fanbase.

Last year, Porridge Radio signed to Secret Canadian and released a string of formidable singles, including ‘Give/Take’, ‘Don’t Ask Me Twice’ and ‘Sweet’ – their first material to be recorded in a conventional studio. They would be the first tastes of follow up record ‘Every Bad’ which was released earlier this year and succeeds in expanding the idiosyncratic sound as first envisioned by Margolin when writing and recording alone in her bedroom.

Porridge Radio have a number of unmissable shows currently on sale with Gigantic. They tour in October before kicking off 2021 with early dates at Reading and Leicester in January.