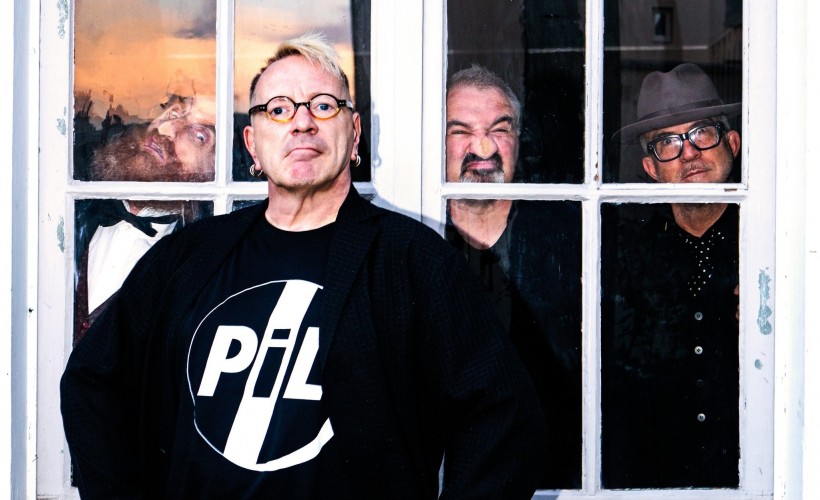 Great performance. Would’ve been 5 stars but I thought the setlist was about 20-30 minutes Short

a fab nite of music!! John Lydon on top form as ever great entertainment sharp as ever cut ya to the core with his wit & humour a fabulous set of musicians a mind blowing performance people young'n'old from all the country gathered together to witness the living legend Mr John Lydon & co.......this will live with me forever & a day enuff said...!!!!!!!

He’s old, he’s fat ( aren’t we all); more energy watching 10 minutes of the Rolling Stones; but you can’t beat that madness and whimsy of our John Lydon. Perfect, a beautiful thing to behold. Thanks.

"the legend lives on"

Absolutely top form and the band were amazing.

The best gig I’ve seen in a while. Venue was great & Mr Rotten was amazing - great music; bouncing all night - want to see them again 😝

Public Image Ltd is a communications company that has nothing to do with rock and roll. Videos, Movies, Soundtracks for films. Sometimes they perform live gigs, depending on how they feel. However, they have released quite a few albums along the way. Ten so far!

Their creation announced the dawn of the new movement of post punk. Predominantly centred around music, the genre shed the nihilism of punk but continued to use the deconstructive energy to explore sonic experimentation that was presented through modernist aesthetics.

Expecting that the Sex Pistols would be the end of rock and roll, John Lydon was disappointed to discover that the farce continued following the bands implosion in 1978. Taking time out following all the fuss, Lydon spent time in Jamaica and America with Virgin Records boss Richard Branson to investigate his possible future in music.

Returning to the UK, Lydon contacted friend John Wardle AKA Jah Wobble with whom he had previously worked with musically. Initially the pair recruited John Gray and John Simon and started a band called The Gang Of Johns. A line-up change resulted in the creation of Public Image, adding Ltd some time later. They announced their arrival with the eponymously titled debut single Public Image which hit #9 in the charts.

The single appeared on their debut album Public Image: First Issue which came out in December of 1978. The record exhibited a development in Lydon’s anti-establishment lyrics and bass heavy music that was heavily influenced by dub and reggae.

Ever inventive, their second album was entitled Metal Box and was packaged in a hard metal container imitating a film canister. The music pushed every more into the avant-garde with greater experimentation and stream of consciousness vocals.

PiL enjoyed greater commercial success with album Flowers Of Romance which hit #11 in the UK Album Charts. The sound continued to evolve with the times as they released new material up until the beginning of the Nineties when they fell into hiatus.

Locked into a terrible record contract, Lydon was unable to re-unite PiL and release new material unless he bought the contract out. He raised the funds through appearing in televised butter adverts and managed to regain the rights to his own work. Subsequently, the band reformed in 2009 and has started to once again perform live and two new albums including latest release; What The World Needs Now.

Public Image Ltd are touring next year, and you can catch them at O2 Manchester Ritz, Engine Rooms at Southampton, Cheese & Grain at Frome, Chalk at Brighton and Rock City in Nottingham during June 2022.

Fans are absolutely thrilled to hear of the release of Public Image Ltd concert tickets, but with only limited amounts being made available you will need to act fast and book yours before they are all gone.

After fronting the Sex Pistols, John Lydon formed post-punk originators Public Image Ltd (PiL). Widely regarded as one of the most innovative bands of all time, their music and vision earned them 5 UK Top 20 Singles and 5 UK Top 20 Albums.

With a shifting line-up and unique sound - fusing rock, dance, folk, pop and dub - Lydon guided the band from their debut album ‘First Issue’ in 1978 through to 1992’s ‘That What Is Not’, before a 17 year hiatus.

Lydon reactivated PiL in 2009, touring extensively and releasing two critically acclaimed albums ‘This is PiL’ in 2012 followed by ‘What The World Needs Now…’ in 2015.

John Lydon, Lu Edmonds, Scott Firth and Bruce Smith continue as PiL. They are the longest stable line-up in the band's history and continue to challenge and thrive.

The band sign to Virgin Records and release their debut single 'Public Image' in October, followed by the album 'Public Image - First Issue' in December. Barely six months after forming.

Jim Walker leaves to be replaced by a succession of drummers, most notably Richard Dudanski then Martin Atkins.

Release of the second single 'Death Disco'. Written by John Lydon to his dying mother.

PiL play their first US shows and also appear on 'American Bandstand'. John Lydon brings the audience on stage to dance and mime to 'Poptones' and 'Careering'.

Jah Wobble leaves. Jeannette Lee - who had worked behind the scenes - takes a more prominent, but still non-musical, role.

Release of third studio album 'Flowers of Romance'. Preceded by the single of same name.

PiL play a special show at New York, The Ritz. They perform behind a huge video screen. The audience riots.

PiL decide to relocate to New York from London due to logistics and Police harassment.

Recording begins in New York on what will be the 4th PiL studio album.

US and Canadian live shows.

PiL play a short Japanese tour. John Lydon is the only founder member still in the band. With the exception of Martin Atkins, the line-up is largely unknown local New Jersey musicians hired for the shows. A live album from the tour is released.

Release of 'This Is Not A Love Song'. PiL's biggest UK hit single; peaking at Number 5. Followed by the first real UK and European tours.

'This Is What You Want… This Is What You Get' album is released, preceded by 'Bad Life' single. The album contains re-recorded material from the 1982 & 1983 New York sessions; including 'This Is Not A Love Song'.

Release of 'Album' album. Recorded with producer Bill Laswell and various session musicians; including Ginger Baker, Steve Vai, and Ryuichi Sakamoto. 'Rise' from the album peaks at Number 11 in the UK charts.

The "new" PiL release their first album together 'Happy?'.

Release of the single's 'Seattle' and 'The Body'.

PiL headline the first day of the 'Rock Summer Festival' in Tallinn, Estonia (USSR) playing to over 120,000 people. The biggest rock festival to be played behind the Iron Curtain.

Lu Edmonds is forced to quit the band due to health problems.

Release of '9'. The 7th PiL studio album. And the 9th album including the two live albums.

PiL - along with New Order and The Sugarcubes (featuring Bjork) - tour North America.The three band package tour - known as 'Monsters of Alternative Rock' - is a forerunner to the now famous Lollapalooza tours of the early nineties.

'The Greatest Hits So Far' compilation album is released; including several 12" mixes and remixes, plus the new track 'Don't Ask Me'.

PiL - Lydon, McGeoch and Dias - release 'That What Is Not'. The band are complemented by sessions players.

John Lydon announces he has put PiL on hiatus to concentrate on recording a solo album; and to complete his autobiography ‘Rotten No Irish, No Blacks, No Dogs’. He also releases 'Open Up' a collaboration single with Leftfield.

John Lydon releases the solo album 'Psycho's Path'. His first album outside PiL since the band was formed. He also plays live dates in North America and Japan.

Release of limited edition 4 CD PiL box set 'Plastic Box'. 64 tracks in total. Including sleevenotes from John Lydon: "This collection represents a comma not a full stop, I fully intend to carry on with PiL,and there will be more in the future…"

Release of John Lydon compilation CD 'Best of British £1 Notes' covering his whole career from the Sex Pistols, through PiL, to solo records and collaborations.

A vinyl replica of 'Metal Box' - 3x45rpm, housed in a metal can - is released in the USA by the 4 Men With Beards re-issue label. This is the first time the album had been released in its original form in the US.

First ever live appearance in Israel. John Lydon declares "I hate all religion. I play for the people of Israel and not the Government”. John Lydon later describes playing material such as 'Warrior', 'Four Enclosed Walls' and 'Religion' as one of the highlights of his career. Particularly when the crowd of Israel joined him on the “Allah’ chorus of 'Four Enclosed Walls’.

Band enter the studio to record their first studio album since 1992.

PiL release the studio album ‘This is PiL’ preceded by the Record Store Day EP ‘One Drop’. The album is self-funded and released on their own PiL Official Ltd label.

Danny Boyle includes ‘Under The House’ in the London Olympics Opening Ceremony.

First ever shows in China, along with tours of Japan and Australia.

John Lydon is honoured with the BMI icon award for songwriting.

Publication of John Lydon's first full autobiography 'Anger is an Energy - My Life Uncensored' covering his full life including PiL.

One-off sold out show at London's 02 at the Indigo.

Release of 10th studio album 'What The World Needs Now...' preceded by single 'Double Trouble' both via PiL Official.

'The Public Image is Rotten’ documentary set for general release.

John Lydon UK Q&A tour is postponed until 2021 due to Covid-19 pandemic.

John Lydon publishes 'I Could Be Wrong, I Could Be Right' limited edition book.

PiL documentary 'The Public Image is Rotten' is given a streaming release.