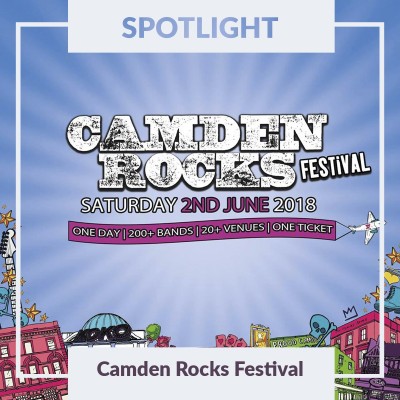 Returning for it’s seventh year, Camden Rocks is the massive all-day festival which can proudly boast of a line up made up of over 200 acts, uniting such vital and influential headliners as Maxïmo Park, Public Image Ltd, Twin Atlantic and British Sea Power with a vast array of up-and-coming performers on their way to big things.

All the action takes place on Saturday 2nd of June and is spread across the stages of more than twenty of North London’s finest venues including Koko, The Underworld, Electric Ballroom and The Dublin Castle.

The eclectic nature Camden Rocks means you can see everything from metal to punk, indie and pop playing at one of the town’s many infamous venues or intimate pubs. Keep scrolling to see some of the band’s we highly recommend seeing.

Scottish trio The Amorettes always bring the rock. This year saw the release of their stunning fourth studio album ‘Born To Break’ which they have recently taken out on the road and the new material will be combined with all their fans favourites at their highly anticipated appearance at Camden Rocks.

The Amorettes are veterans of Camden Rocks and their bassist Heather Mckay is eager to be part of the action once again.

“We're so excited to be playing at this amazing festival again. Such a diverse line up every year there's something for everyone here. We love to just wander about and catch as many acts as we can. We've played two years now first at proud in the stables market and then the monarch bar on the high street which is where you can catch us again this year at 5pm!

We have a half hour set so expect all the bangers and mash stuffs into 30 minutes. It was a packed out hot ass room last time so get there early so you don't have to watch through the window!”

Bristol is famed for being a city which is brimming with creativity which has given birth to blistering hot post punks Heavy Lungs. Having earned a reputation for chaotic yet compelling live performances which they have captured on their recent ‘Abstract Thoughts’ EP, we highly recommend you catch their set.

We got in touch with Oli Southgate of Heavy Lungs to ask about playing Camden Rocks;

“It's very nice to be asked to do it. Camden is always a hoot, and we're looking forward to playing. As for the set, expect skin, sweat, tea and lots of glam.”

The huge successes for Cambridge rockers Mallory Knox continue, having seen their debut album ‘Signals’ break the Top 40 in 2013 and their subsequent records ‘Asymmetry’ and last year’s release ‘Wired’ climbing even higher to sit comfortably within the Top 20 in the charts. They now offer you the rare chance to get up close and personal with them with an intimate set in the Dr. Martens Boot Room located in the heart of Camden Market as a competition prize. Click HERE to enter.

Speaking to Sam Douglas from the band, he got in touch with Gigantic to let us know how much he’s looking forward to playing Camden Rocks following their recent studio sessions;

“We're excited to get back to London & play our first London show as a four. When we heard about the Camden Rocks offer it was a no brainer as over the years we feel like we've played every venue going there, from Barfly all the way up to the Roundhouse. Obviously, we've been busy behind the scenes writing our next record and whilst it's fun playing some of the older songs I'm really looking forward to playing some of the new ones live.”

South Yorkshire four-piece Alvarez Kings exploded last year with the release of their debut album ‘Somewhere Between’ which saw them combine uplifting pop melodies with powerful and emotive rock sensibilities – marking them as one of Britain’s hottest new bands. Their summery feel makes them the perfect addition to Camden Rocks and we expect to see a lot more of them on the festival circuit.

Bassist Paul Thompson gave us a shout to tell us what we can expect from their upcoming set;

“Really excited to be a part of this year’s Camden Rocks Festival. It’s always a blast playing down there and hopefully with the sunshine out it should create a good atmosphere for everybody attending.

We play The Monarch at 6pm and we encourage anyone who is into an energetic live show and summer infused indie pop be there and party with us.”