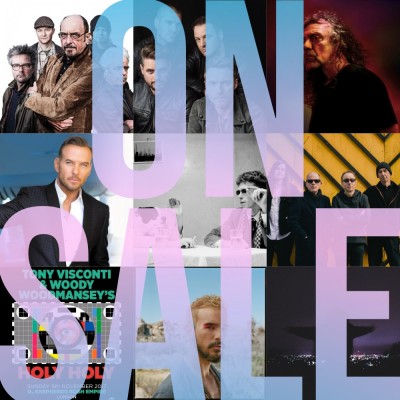 Legendary hard rockers Jethro Tull first formed in the later 60’s. Fusing blues, folk and prog, they began to climb the charts seeing such major hits as ‘The Witch’s Promise’ and ‘Living In The Past’ which saw them develop huge audiences in the UK and US. Having sold 60 million records worldwide, they have proved to be one of the biggest bands of all time.

2Q Festival heads to Lincoln to make use of the various fantastic venues to play host to a one-day festival featuring cuttings edge acts and a huge roster of names you need to know. Circa Waves, Peace, British Sea Power plus many more are scheduled to play.

2Q Festival will also return to the many sensational independent stages of Derby on Saturday 7th of April. Following up on the massive success of last year, 2018 will also boast a huge range of big names. Early bird tickets are on sale right now.

Having sold 25 million records worldwide and releasing seven hit studio albums over a career which has lasted more than twenty four years, there can be little doubt that Boyzone are one of the biggest boy bands the world has ever produced.

Do not miss out on your chance to win a meet and greet with Boyzone. We are offering one lucky customer the prize of having their photo taken with the boys. For further details, take a look at the competition terms and conditions.

Bringing together all your favourite Disney characters, Disney On Ice Presents Passport to Adventure invites you to join a huge cast including Mickey Mouse, Minnie Mouse, Donald, Goofy and Daisy on a journey to the timeless worlds of Disney’s The Lion King, The Little Mermaid, Peter Pan, and Disney’s Frozen.

The tour takes Disney On Ice Presents Passport to Adventure to Glasgow, Newcastle, Manchester, Birmingham, Sheffield and London over Autumn and Winter. Be sure to catch the show at an arena near you!

Needing absolutely no introduction, the ultimate frontman Robert Plant has shaped the sound of rock music through his work with Led Zeppelin. He continues to put on stunning live performances with his band The Sensational Space Shifters who play headline a headline show at Wolverhampton Civic Hall. Robert Plant and The Sensational Space Shifters tickets are released at 09:00 on Friday.

Get ready for the festive season with five nights of A Matt Goss Christmas at O2 Shepherds Bush Empire in London. The former star of boy band Bros leads an intimate show performing classic songs of the season plus his own material. A Matt Goss Christmas tickets are released at 10:00 on Friday.

We highly recommend you set yourself ahead of the rest by setting a personal reminder with Gigantic so we can alert you with a text message or an email as soon as they become available.

There are always exciting new events coming on sale, and this week is no exception. Check out all these amazing tickets being made available this week:

The Summer Bank Holiday is nearly upon us. If you are looking for something exciting to do, then check out our Bank Holiday Top 10 Blog for some great suggestions. We have everything from rocks gigs to children’s festivals, folk parties and even wrestling!

Get yourself to Newstead Abbey this weekend to enjoy exhibitions from celebrity chefs with plenty of tasty treats to try. Great Food and Drink Festival is fun for the while family.

British Sea Power have proved to be one of the most interesting indie bands to emerge in recent years. This year has seen the release of their incredible new album titled ‘Let Dancers Inherit The Party’. Following many prominent festival appearances, they head out on tour in October to promote the new material.

Join Yasiin Bey and Talib Kweli for the hip hop event of the year. Taking place at Troxy in London on Friday 29th of October, Black Star brings together the rap heavyweights for an unmissable show proving just why they are heralded as producing one of the greatest albums of all time when they perform Yasiin Bey and Talib Kweli Are Black Star live.

Gigantic is always the right place to find the very best events tickets. Make sure you do not miss: