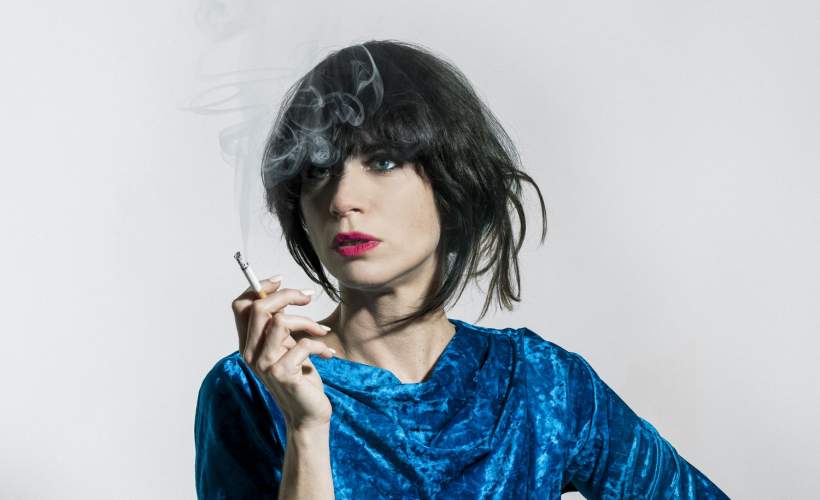 
The star of Nicole Atkins is ascending. Following the release of her highly anticipated forth studio album Goodnight Rhonda Lee., Nicole Atkins now gets on the road. Make sure you catch her headline performances at Wedgewood Rooms in Portsmouth and The Lexington in London April 2019.

Gigantic is very excited to able to be able to offer you Nicole Atkins tickets - but as word spreads the demand grows so please book yours early so that you do not miss out. Fortunately, place your order with Gigantic is easy as you can book your gig tickets 24/7 using a smartphone, tablet or computer at home or on the go.

“Everything on Goodnight Rhonda Lee is immediate. Throughout, Atkins’s lyrics eschew metaphor in favor of a more confessional mode, and her arrangements are punchy and direct.” - Slant Magazine

“With Goodnight Rhonda Lee, Nicole Atkins gets all the pieces to fit. The singer may not have been made for these times, but she creates a defining portrait of an artist whose grasp of the past creates ageless, enduring music for any year.” - American Songwriter

In each song she creates, Nicole Atkins reveals her incredible power to transport listeners to a much more charmed time and space. On Italian Ice, the New Jersey-bred singer/songwriter conjures the romance and danger and wild magic of a place especially close to her heart: the Jersey Shore in all its scrappy beauty. Inspired by the boardwalk’s many curiosities-the crumbling Victorian mansions, the legendary funhouse, the Asbury Park rock-and-roll scene she played a key part in reviving-Atkins transforms her never-ending fascination into a wonderland of her own making.

For help in capturing the shore’s kinetic spirit, Atkins assembled a studio band whose lineup feels almost mythical. Recorded at the iconic Muscle Shoals Sound Studio in Alabama, Italian Ice finds the Nashville-based artist joined by Spooner Oldham and David Hood (both members of The Muscle Shoals Rhythm Section, who played on classic records from the likes of Aretha Franklin and Etta James), Binky Griptite of The Dap Kings, Jim Sclavunos and Dave Sherman of The Bad Seeds, and drummer McKenzie Smith (St. Vincent, Midlake). With special guests including Spoon frontman Britt Daniel, Seth Avett of The Avett Brothers, Erin Rae, and John Paul White, the album is a testament to Atkins’s uncommon talent for uniting musicians of radically different sensibilities. As Atkins explains, the abundance of collaborations on Italian Ice partly stems from a freak accident in which she stumbled into a sinkhole in a Knoxville parking lot-an incident that left her with a profound longing to fill her life with the people and experiences that bring her the most joy.

Co-produced by Atkins and Ben Tanner of Alabama Shakes, Italian Ice makes brilliant use of its A-list personnel, unfolding in a kaleidoscopic sound that Atkins likens to “an acid trip through my record collection.” At turns as opulent as symphonic pop and gritty as garage punk, the album wanders into shades of psych-rock and honky-tonk and girl-group melodrama, endlessly spotlighting the tightly honed musicianship and unbridled originality at heart of Atkins’s artistry.

There are only limited supplies of Nicole Atkins concert tickets being made available by the event promoters so with the demand ever growing you will need to act fast or risk missing out. Gigantic is the home of a massive array of essential gig tickets, so take advantage of our excellent customer services and booking your big night out with us.