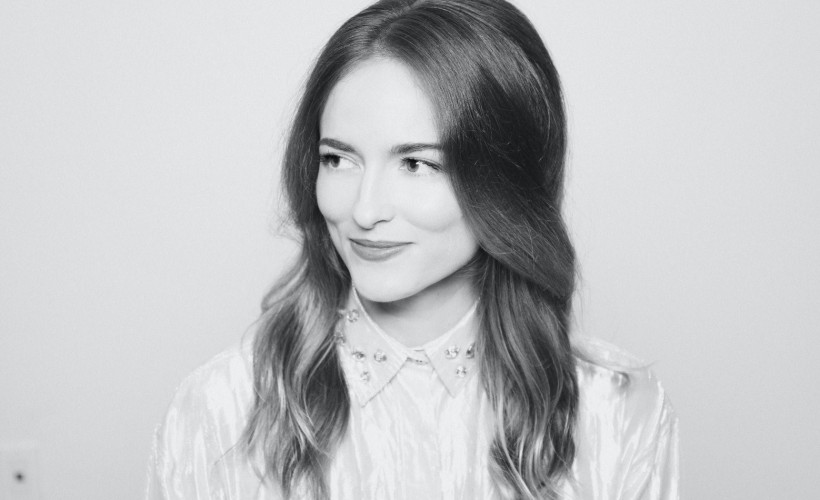 A stella performance by Dawn and her band. A tiny packed venue with no frills which was loved by artist and an enthusiastic crowd alike. Both artist and audience fed off the atmosphere, and Dawn was also fed by regular swigs from a bottle of whiskey. The songs from Dawn's new album Meet Me at the River were even better live than on first listening of the album. It could well prove to be Dawn's best work yet. A fabulous evening.

Based in Brooklyn, but raised in Louisville, singer-songwriter Dawn Landes has been writing songs for most of her
life, and already has more than a decade of experience as a professional producer and engineer. After leaving NYU
where she studied psychology and literature, Landes began honing her production and engineering skills, working
at Stratosphere Sound (owned by James Iha, Adam Schlesinger, and Andy Chase), and at Philip Glass' personal recording studio, before launching Saltlands Studio in Brooklyn with partners Steve Salett and Gary Maurer.

Her new album Bluebird was produced in collaboration with good friend Thomas Bartlett (known for his work with
The National, Sharon Van Etten, Rufus Wainwright, Antony and the Johnsons, and many others), and features contributions from Tony Scherr, Rob Moose, and Norah Jones.

Press coverage of Bluebird will understandably present this album as Dawn's answer to her ex's "divorce record".
However, like any great songwriter, she's abstracting her personal narratives enough to leave them open to
interpretation and a larger meaning. Bartlett's spartan production keeps the vibe intimate, making it easy to
connect with these naked and honest songs which manage to rise above the context in which they were written.

In the end, the fact that Bluebird is Landes' way of processing the overwhelming emotions she dealt with after
her divorce doesn't matter - there are two sides to every story, and this is hers.

“Spectral, languid, and arranged with a light touch, the songs are lled with after-midnight ruminations couched in a dreamy ambiance and centered on Landes’ beguiling, ethereal voice” NO DEPRESSION

“Landes, a New York-dwelling songwriter who happens to be married to songwriter Josh Ritter, has a honey-crisp
style of singing that sounds, on this record, like an old-time bluegrass singer, in the way that Jenny Lewis does -
no ash, no showy display, no breathtaking few seconds, when the colored re suddenly usurps the entire sky and
blows the eyes a thousand kisses” DAYTROTTER

"The comparisons to Feist and Jenny Lewis aren't unwarranted. New York singer-songwriter Dawn Landes is a haunting presences in the world of alt-folk experimentalism. Her lyrics mix whimsy with irony. Her faltering voices hints at vulnerability hidden beneath her hypnotic stage presences" BLACKBOOK

"Musically she exists somewhere between Feist and Townes Van Zandt, and her New York-by-way-of-Kentucky pluck is a refreshing antidote to schmaltzy neo-folk" SPIN

“Dawn's songs evoke the landscape of the all-American outback. Her debut album, Fireproof, makes you think of
frayed lumberjack shirts, dirt-tracks and the desert sun burning on the back of your neck” DAZED AND CONFUSED