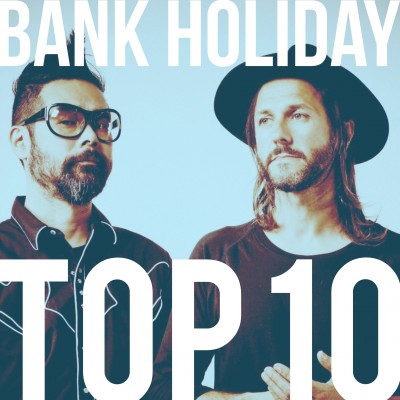 Are you ready for the Summer Bank Holiday weekend? Friday 26th until Monday 28th of August offers you the perfect chance to get and about for three days of fun. Gigantic has a huge range of events on offer, from music festivals, sporting events and tasty treats enabling you to enjoy your long weekend no matter what your interest.

We take a look at the Top 10 Bank Holidat Tickets on sale right now!

Every year, Reading and Leeds Festivals offers rock fans an intense line-up of huge international acts making for a truly riotous weekend. Headliners for 2017 includes Kasabian, Eminem and Muse plus many more bands to check out all adding to one of the biggest music events the world has to offer.

Dinofans will be flocking to Woolaton Hall in Nottingham to enjoy the world exclusive exhibition Dinosaurs Of China showing how the prehistoric beasts of the past evolved into the birds that surround us today. Marvel at the colossal 3D mounted skeletons including the mighty Mamenchisaurus which towers above three double decker buses.

Led by Jme and Skepta, grime collective Boy Better Know have announced a on day takeover of The O2 Arena in London on Sunday 27th. The massive day event will include live performances from their awesome roster of MCs and DJs, plus other activities including a cinema plus special sport and video games exhibitions to get involved in.

Marvellous mod revivalists Ocean Colour Scene exploded onto the scene with the release of their seminal album ‘Mosely Shoals’. Get down to Hastings Pier on Saturday 26th were the four troubadours will play the record in full, plus selected hits. They are joined by special guests Peter Hook & The Light and The Bootleg Beatles.

Newstead Abbey plays host to a three-day celebration of culinary delights plus the opportunity to learn from such celebrity chefs as Candice Brown and Rosemary Shrager. The Great Food and Drink Festival also gives you the chance to sample succulent treats and taste exciting morsels from all over the world.

Feeder took all the energy of grunge and combined it with the upbeat infectious sound of pop punk to become international superstars. The band have clocked up a staggering 180 weeks in the charts with their records including ‘Buck Rodgers’, ‘High’ and ‘Come Back Around’. Join them at Chepstow Racecourse for an unmissable headline set on Friday 25th of August.

Fans of folk will all be after tickets to Shrewsbury Folk Festival. The big celebration encompasses five dedicated venues plus a craft fair, dance hall and events especially for a younger audience. This year, you can look forward to seeing Loudon Wainwright III, Faith, Folk & Anarchy, Eric BIBB, Oysterband plus many more.

If you like your beats loud, heavy and dark then get yourself to Infest 2017 at Bradford University Student Central. It features performances from some of the biggest names in industrial, darkwave noise and synthpop over three days. The weekend is jam packed with great bands, DJs and producers for you to enjoy.

This weekend sees a huge heavy weight competition in the ring when the mighty Jack Swagger, former WWE World Champion, is challenged by the indominable Dave Mastiff at Portsmouth Guildhall for Revolution Pro Wrestling. This clash of titans will also feature fights from Zack Sabre vs. Will Ospreay plus All Day Swerve (Ryan Smile & Shane Strickland) Vs. Kurtis Chapman & Josh Wall.