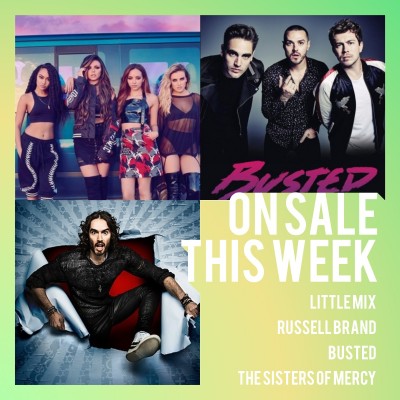 Winners of The X Factor, Little Mix have grown to become the UK’s best love girl band with such massive hits as Wings, Black Magic, Secret Love Song and Shout Out To My Ex. With the release of their album Glory Days towards the end of 2016 they have announced live dates to promote their new material.

Having already sold out most of their tour, the girls have just added extra dates at Haywards Heath and Norwich which are expected to sell out – fast! Book yours before they are gone.

Maverick troublemaker Russell Brand is a man of many talent; actor, presenter, author and activist. But he is best known for his high-energy comic performances which explore Brand’s madcap escapades as he delves headfirst into the world of sex, drugs and rock & roll!

See Brand return to stand up when he presents his Re: Birth Tour which starts this summer and continues well into the next year, coming to a stage near you.

This year sees some huge names gracing the South Yorkshire stages. Get ready to rock to the likes of Primal Scream, Kano, The Libertines, All Saints and more.

Tramlines tickets are now on sale.

2Q Festival 2017 certainly packs a punch. The inner city music festival brings together the many excellent independent stages Derby has to offer to create one enormous party.

Returning for its second year, 2Q Festival has added a further four venue and attendees will be treated to some of the very best rising stars plus such awesome bands as Milburn, Temples and Pulled Apart By Horses.

Legends of pop punk; Busted are back with their brand-new album Night Driver. James Bourne, Matt Willis and Charlie Simpson expand on their teenage guitar hits with a new mature sound which taps into dance prepping them for renewed pop success. Catch them for an exciting performance at Cardiff University Great Hall in July.

Seminal goth rock band Sisters Of Mercy have just announced two nights at Roundhouse in London. Famed for their dark and intense live performances, Sisters Of Mercy were the ultimate cult band before splitting into The Sisterhood and The Mission. Having now reunited, their tickets go on sale at 10:00 on Friday (24/03).

Gigantic always has the very best tickets on sale. Check out the amazing array of events coming on sale this week:

Peterborough Arena plays home to The 80s Music Festival. An incredible weekend featuring some of the decades defining artists such as Bananarama, Five Star, Aswad and many more.

The 80s Music Festival tickets are now on sale.

Wouldn’t you like to get away to where the beaches have beautiful white sands and the sea is pure blue? Fly away to Zrce Beach at Pag in Croatia to see Rae Sremmurd, Sean Paul and more.

Blues guitar ace Joe Bonamassa has an impressive career in music behind him. With the recent release of album Blues Of Desperation, he has announced a number of exciting dates at Edinburgh, London, Blackpool and Sheffield.

German rock guitar legend Michael Schenker holds his very own fest at O2 Shepherds Bush Empire in London on Thursday 2nd of November, 2017. He will be joined by Gary Barden, Graham Bonnet and Robin McAuley.

And finally, other events we know you will love include: