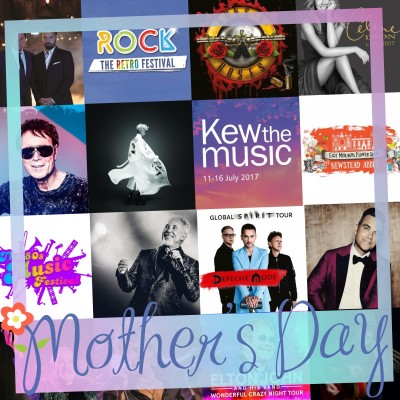 Mother’s Day celebrates all the limitless love and the lifetime of care your lovely Mum has bestowed upon you throughout the past year and beyond. A special day you can share with her and show your appreciation for everything she has done for you by spoiling her with a thoughtful gift.

If you are looking for that special something, then Gigantic has the perfect way to say thank you. We have a huge range of tickets so you can be sure to find something to suit your own very cherished mother.

Party animals all love exciting retro events Let’s Rock! and The 80s Music Festival. The two festivals celebrate the era of the New Romantics and immense shoulder pads by inviting the best bands and singers of the day to perform on their stages. 80s vs 90s takes it even further by also bringing forward you into the decade of grunge, Britpop and boy bands.

Maybe your mother would like the classic sound of Celine Dion? The Canadian singer never fails to impress, raising the roof with her incredible voice singing such huge hits as My Heart Will Go On and It’s All Coming Back To Me Now. Or if she likes something a bit newer, sensational R&B and soul singer Emeli Sande rose to fame with the song Next To Me and tours later in the year. Plus, Prince of Pop Robbie Williams is on tour in June to promote new album The Heavy Entertainment Show and play all his other hit singles.

Everyone is different and while some may like their pop we know there are plenty of Mum’s out there who love to rock- and there is no bigger band out there than Guns N’ Roses! Led by Axl Rose, the band is re-joined by original bassist Duff McKagan and ultimate lead guitarist Slash to blow The London Stadium away.

Kew The Music always brings together an awesome array of some of the biggest names to the scenic Kew Gardens in London. This year you can look forward to indie icons James or Razorlight, folk rockers Passenger, ultra cool All Saints and Haçienda Classical who rework the rave anthems of those heady Madchester nights.

There are few bigger names than Cliff Richard. His pop career has seen him sell a staggering 250 million records worldwide and is beloved by mothers absolutely everywhere. His summer tour sees him rework classic rock and roll songs of yesteryear plus the very best of his greatest hits.

Tom Jones has remained a sex symbol ever since his explosion in the swinging sixties. His winning combination of devilish good looks with a superb singing voice has seen him through a fifty-year career with no sign of stopping any time soon. He tours throughout June and July.

Michael Ball & Alfie Boe unite for an evening of sophisticated entertainment. The pair combine to present a one of a kind performance where attendees will enjoy hearing two of the world’s greatest singers join together for a unique show.

The East Midlands Flower Show is a pleasurable exhibition of show gardens set in the scenic grounds of Newstead Abbey. Returning for a second year, attendees will be delighted by a beautiful weekend offering the very best horticultural experience one could hope to attend.