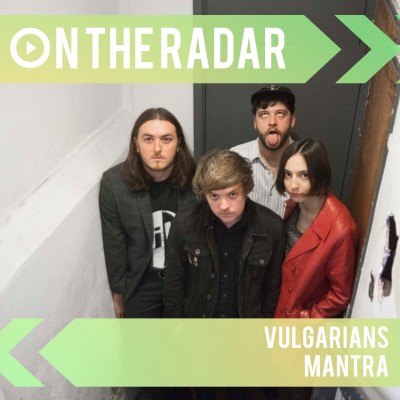 Combing a confident swagger with bruising power; Vulgarians visceral approach to psyche and garage rock leans towards the heavier end of the spectrum, giving it an immediate edge and a sense of danger. Each song a masterclass in how to unleash an aural onslaught with self assured ease.

They are amongst the leading bands in the huge tidal wave of Hull acts emerging from the gritty yet creative fertile northern urban epicentre, benefitting from the well-deserved exposure the city is receiving after being appointed 2017 City Of Culture.

With the release of their brand new three track EP Almost-Instinct Almost True, the crushing post punk band are currently regularly hitting the practice room to become absolute fighting fit, ready to hit the road. The new record takes its name from fellow hometown creative Philip Larkin, who used the phrase to describe his poetry. The words struck a chord with singer Ryan Wilson-Preen; “The phrase in particular just flowed quite unnaturally off the tongue and I guess upon reflection, that captures the honesty in the music”.

Almost-Instinct Almost True is Vulgarians latest record and features the single Hands Around The Waste. The song maintains the band’s muscular approach to music, with guitarist Luke Ellerington meandering through psyche guitar riffs to explode in distortion when joined by the knock out basslines of Jodie Smith. The provides the perfect granite hard bedrock to allow Wilson-Preen to veer from an almost cavalier croon to a full on belligerent berating of the listener. Further track titles include Of Humdrum Consumption and Career Dietary.

Their upcoming tour in promotion of the EP culminates with an immense final show at Rock City. When we asked about their exciting upcoming headline gig at the iconic venue, drummer Connor Cheeseman had this to say;

"We've always really loved Nottingham and insisted that we needed at date there on our next tour, when planning it. It's a Saturday night and we have a load of pals in Notts too, so it should be one to remember. It's the final night of the tour, too!"

Three piece hard rock band Måntra fuse the power of hugely overdriven guitars with a unique understanding of dynamics to create music which has a riotous effect upon audiences at a sweaty gig whilst also sounding right at home on the radio. Their intrinsic understanding of melody combined with their obvious passion and sheer talent ensures they have all the ingredients to become the next big thing.

Måntra were quick off the mark, starting the year with the release of phenomenal new single I Want. A one hundred and fifty second bright burst of awesome guitar hooks and soaring singalong vocals. This song has breakthrough single written all over it and is the title track of their debut EP which also includes the single Destroy You. Guitarist and singer Simon Stark penned the I Want EP as a scathing criticism of the world that surrounds him. The record tackles a wide spectrum of problems, but is “mainly focused on consumerism, questioning religious theocracy and social anxiety but the thread that ties them all together is the ever increasing self-centred nature of people”.

They are just about to embark upon an extensive May tour which sees them play Night And Day in Manchester, The Cluny 2 at Newcastle, Leeds Headrow House, Sunflower Lounge at Birmingham and Epic Studios in Norwich. Måntra never fail to thrill the audience so make sure to catch them when they play a stage near you.